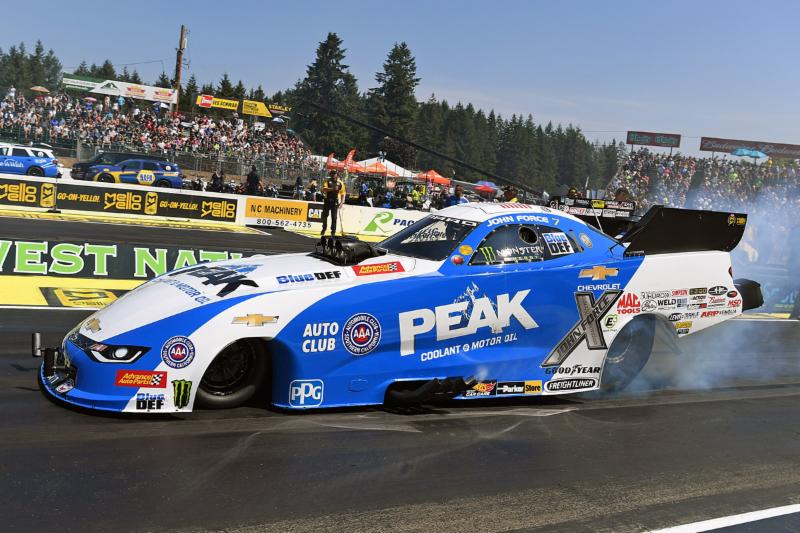 If John Force is to win his 150th NHRA event before the end of his 42nd pro season, his best opportunity may come this weekend when he drives the PEAK Coolant and Motor Oil Chevrolet Camaro SS in pursuit of the Funny Car championship at the 37th annual Lucas Oil Nationals at Brainerd International Raceway.
At no other venue has the Hall of Fame owner/driver been more successful than at BIR where he has won 11 times in 32 career appearances, where he never has failed to make the starting field and where he has won 78.3 percent of the elimination rounds in which he has been involved (76 of 97).
Coming off a final round triumph over teammate Robert Hight in last week’s independently-produced Night Under Fire at Norwalk, Ohio, the 69-year-old’s confidence is steadily growing as he battles to secure one of the 10 Funny Car starting spots in the upcoming Countdown to the Championship.
Despite early season issues that included a rare DNQ (only his 22nd such misstep in 751 career races), Force rolls into Minnesota in eighth place in points with only the Labor Day Chevrolet Performance U.S. Nationals remaining before the NHRA confirms those who are championship eligible and adjusts the points accordingly.
“We’ve got a young team with (crew chiefs) Jon Schaffer, Ronnie Thompson and Joe Veyette leading the way,” Force said. “These kids are learning every week and I’m learning about this Chevrolet Camaro. We struggled, but right now I think we’ve got a car that can compete – and that’s all you can ask for.”
Indeed, after spending the first eight races outside the Top 10, Force has rallied to give himself at least a chance to compete for another championship. He took the PEAK Chevy to a runner-up finish two months ago at Richmond, Va., before securing a victory in the NHRA Mile-High Nationals at Denver, Colo., that extended to 31 the number of seasons in which he has won at least one NHRA tour event.
As a result, he will start Friday’s first qualifying session 88 points ahead of former Top Fuel world champion turned Funny Car driver Shawn Langdon, who presently occupies the No. 9 spot, and 133 ahead of Bob Tasca III.
Nevertheless, recent success and his history at BIR notwithstanding, the 16-time champion’s participation in the playoffs is far from certain.
“We’re not safe,” Force said of his bid to secure a Top 10 berth for the 34th straight season. “We’re better than we were, but there’s still a lot of work to do; still a lot of racing plus there’s extra points at Indy (one-and-a-half times as many as for any other of the first 18 events).
“We’ve just gotta keep going rounds and getting points,” acknowledged 16-time NHRA champion who last won the title in 2013. “When you’ve got Langdon and Tasca and Cruz (Pedregon) and (Tim) Wilkerson all behind you, anything can happen. We have to take care of business.
“We can’t worry about everybody else,” he said. “We just have to not make mistakes. Everybody’s got to do his job. If that happens, we’ve got a chance. Mistakes have hurt us. No more mistakes.”
Despite his 11 wins in the Lucas Oil Nationals, Force hasn’t hoisted the trophy since 2007 when he beat fellow Hall of Famer Kenny Bernstein in the finals. He was thwarted by Ron Capps in the final round in 2012 and 2014 and last year was beaten by the now-retired Alexis DeJoria in the semifinals.
Qualifying at the 37th annual Lucas Oil NHRA Nationals starts Friday with sessions at 2:15 and 5:00 p.m. and continues Saturday at 1:30 and 4:30 p.m. Eliminations are set to begin Sunday at 11 a.m. Catch qualifying live on FS1 Friday at 6 p.m. ET with live finals on Sunday at 2 p.m. ET.
JFR PR/Photo Credit: Gary Nastase, Auto Imagery