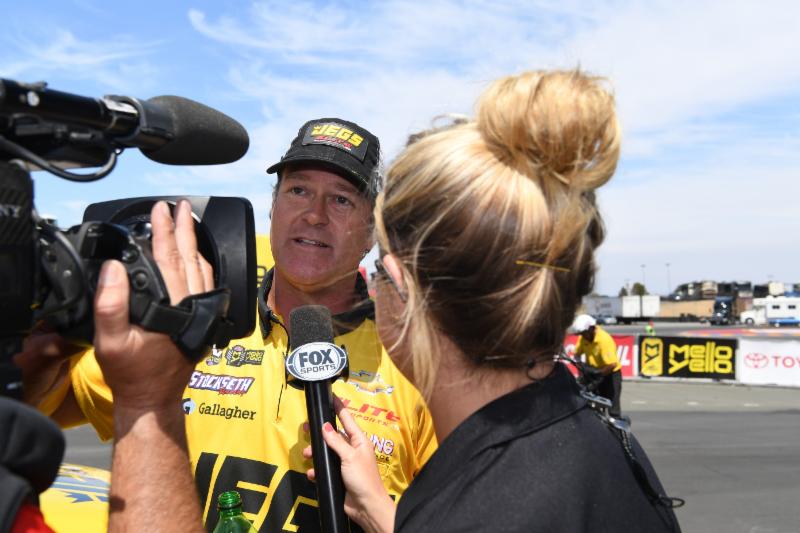 Five-time Pro Stock champion Jeg Coughlin Jr. and the JEGS.com/Elite Performance Chevrolet Camaro team are riding a wave of momentum – and it’s the perfect time of the NHRA Mello Yello Drag Racing season.
The Lucas Oil NHRA Nationals this weekend at Brainerd International Raceway marks the last race before the prestigious U.S. Nationals and the penultimate race before the Countdown to the Championship.
And Coughlin and crew are poised to make a run at both the Brainerd title and another NHRA championship.
“We’ve got a great car,” Coughlin said. “We’re still riding high from our victory in Sonoma (two races ago) and it’s made for a great second half of summer. We put together eight great runs there and it was a wonderful weekend at a track we really enjoy.
“We were No. 1 in Seattle (last race) and the car was strong again there but we just got nipped in Round 2 by our teammate, Vincent Nobile, who obviously has all the same gear we have. That happens at times when you have five Elite Motorsports cars in the field.”
Coughlin now heads to the famed Brainerd track, where he has four victories in his stellar career. Coughlin sits fifth in the Pro Stock standings, with three victories in 2018.
“Brainerd is another track I really enjoy and one where we’ve had some great success,” Coughlin said. “Compared to Sonoma and Seattle, we won’t get the perfect barometer readings there but you can be very aggressive with the track surface so we’ll be able to get after it. Generally, lower horsepower tracks we can attack work out well for us so we’re very optimistic.
“Brainerd is a crazy race. The Zoo campground is full of some fun-loving fans from Minnesota, Wisconsin and Canada, among other places, and this year we’ll be out there with FOX TV so we’ll have some extra fun with the fans.”
Jeg’s wife Samantha will be joining him on the track at Brainerd, as she’ll compete in the JEGS.comdragster in Super Comp.
Coughlin’s nephew, Troy Coughlin Jr., will be racing in an NHRA Lucas Oil Drag Racing Series event this weekend at Cecil County Dragway in Rising Sun, Md., a Division 1 event.
The yellow and black won’t just be at the drag strip. Cody Coughlin will get behind the wheel of the JEGS Chevrolet for the UNOH 200 NASCAR Camping World Truck Series race Thursday night at Bristol Motor Speedway and JEGS corporate will be taking a rig and display to this weekend’s Woodward Dream Cruise in Detroit. The event is a 16-mile radius of Woodward Avenue that attracts more than 1.5 million people and 40,000 Hot Rods.
Team JEGS  PR
Post Views: 164