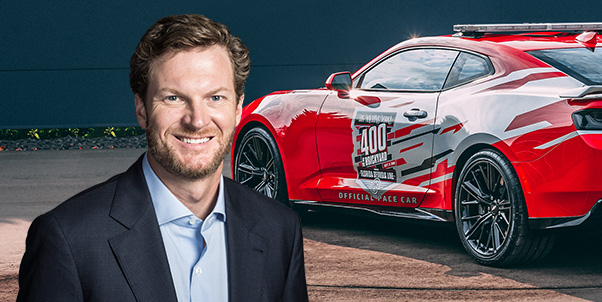 NASCAR icon Dale Earnhardt Jr. will drive the 2018 Chevrolet Camaro ZL1 Pace Car to lead the field to the start of the 25th Running of the Big Machine Vodka 400 at the Brickyard Powered by Florida Georgia Line on Sunday, Sept. 9 at the Indianapolis Motor Speedway.

The announcement was made 25 days before the 25th Running of the race, which starts at 2 p.m. (ET) on the historic 2.5-mile oval. The Brickyard is moving to a new date this year from late July and is serving as the finale of the Monster Energy NASCAR Cup Series regular season for the first time. The field for the NASCAR Playoffs will be set following the race at IMS.

“I am honored that Chevrolet asked me to drive the Camaro ZL1 Pace Car in one of the biggest races of the year,” Earnhardt said. “The fan in me was already looking forward to this event. It’s a big race. There is a lot at stake since it’s the final chance for the teams and drivers to make the Playoffs. So, I hope to do a good job leading the field to the green flag, but I can promise you I’ll soak in every minute and enjoy the Brickyard in a way I never have before.”

The two-time Daytona 500 winner made 17 Brickyard starts between 2000-17, with a best finish of fourth in 2012 among his five top-10 finishes. He won 26 points races during his NASCAR Cup Series career, which ended with his retirement after the 2017 season.

Earnhardt now serves as a NASCAR television analyst for NBC Sports and also leads Dirty Mo Media, which includes his popular “Dale Jr. Download” podcast. Earnhardt is one of the most beloved drivers in American motorsports history, as fans named him NASCAR’s Most Popular Driver for a record 15 consecutive years.

“Dale Jr. will enjoy a unique and exciting Race Day this year at the Brickyard,” IMS President J. Douglas Boles said. “He’s leading the field to the green flag of one of the most prestigious races on the calendar, and then he’ll head right to the booth to offer his insightful analysis for NBC Sports. Everyone at IMS and all of our loyal fans can’t wait to welcome back one of the most admired drivers to ever turn a wheel at IMS, and his role as Pace Car driver adds even more excitement to our action-packed week of racing, music and family fun.”

Earnhardt will drive a 2018 Camaro ZL1 that features:

The only content separating the Pace Car from a production model is unique graphics and an integrated Whelen LED safety lighting system.

Chevrolet has a storied history with the Indianapolis Motor Speedway. Chevrolet was founded in 1911, the year of the inaugural Indianapolis 500-Mile Race, and company co-founder Louis Chevrolet, along with brothers Arthur and Gaston, competed in early Indy 500 races. Arthur Chevrolet competed in the 1911 race, and Gaston Chevrolet won it in 1920.

A Chevrolet has won the NASCAR Cup Series race at the Brickyard 17 times, more than five times as many victories as the next-closest manufacturer.

“We are proud that Dale Earnhardt Jr. will drive the Camaro ZL1 Pace Car for the Brickyard 400,” said Steve Majoros, director of Chevrolet Car and Crossover Marketing. “It will be special to have a longtime partner like Dale Jr. behind the wheel of the ZL1 as Chevrolet paces this special race for the 25th time.”

Visit IMS.com to purchase tickets for the Big Machine Vodka 400 at the Brickyard Powered by Florida Georgia Line and Lilly Diabetes 250, and for more information on the event.