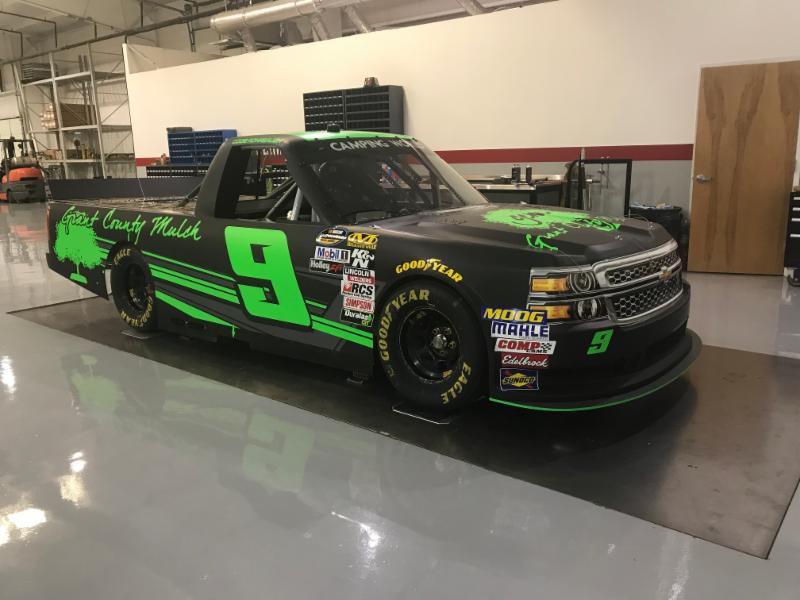 On the strength of three consecutive top-10 finishes in the ARCA Racing Series, veteran racer Codie Rohrbaugh and his Grant County Mulch Racing team invade the NASCAR Camping World Truck Series (NCWTS) tour this week hoping to earn a starting berth in Thursday night’s UNOH 200 at Bristol (Tenn.) Motor Speedway.
With veteran leadership from crew chief Mark Huff, Rohrbaugh and his family-owned team head to “Thunder Valley” looking for a clean day of activity and build a notebook in
preparation for an expanded schedule later this season.
“We’re very excited about Bristol this week,” said Rohrbaugh. “It’s a huge step for us to take a very low-key ARCA program and try to make one of the biggest Truck Series races of the year. But, I feel we can do it and do it well. Can’t wait to get on track Thursday.”
Acquiring a truck from Hopkins chassis earlier this season, the team has been prepping their No. 9 Grant County Mulch Chevrolet in-between their seven races of competition in ARCA. After a slow start to the season, the team has excelled with four top-10 finishes in the last five races, including a seventh-place run in their most recent outing at Pocono (Pa.) Raceway last month.
“The thing that I’m most proud of – is that despite being a family-owned team – we’ve been fortunate enough and blessed to have the resources to bring fast and competitive cars to the race track.
“We could have made our Truck debut sooner –but we wanted to wait for that right opportunity – that right chance to make an impression. I think Bristol is it. I have experience there before in an K&N car and even though I’ve never raced in a truck, I’m hoping I’ll be able to get comfortable pretty quick and we can focus on qualifying and race runs.
“We don’t have any points – so we need to make the race on speed. Once we’re in the race, we’ll regroup and look to gain a bunch of knowledge and finish the race. If we can do that, the race will be successful.”
With at least one more ARCA Racing Series start on the agenda in October at Kansas Speedway, Rohrbaugh says his Mooresville, N.C.-based team is aiming to return to trucks for one of the three final races of the year at Texas, Phoenix or Homestead.
“We haven’t really decided which race we’re going to tackle, yet,” added Rohrbaugh. “We’ll see how Bristol goes and then make the decision that’s not only in the best interest of our team, but our partners too. For now, Bristol here we come.”
In 17 career ARCA starts, Rohrbaugh has a best finish of seventh at Pocono Raceway (July 2018) after starting a career-best seventh in the same event. Overall, he has six top-10 finishes during three part-time seasons of competition.
Marketing partnership opportunities are available for the No. 7 Grant County Mulch Chevrolet for the 2018 ARCA Racing Series and NASCAR Camping World Truck Series seasons and beyond.
Interested inquiries are encouraged to contact [email protected].
The UNOH 200 (200 laps | 106.6 miles) is the 16th of 23 races on the 2018 NASCAR Camping World Truck schedule. Practice begins on Thurs., Aug. 16 from 9:05 a.m. – 9:55 a.m., while final practice is set for 11:05 a.m. – 11:55 a.m. Qualifying is set for later in the day beginning at 4:10 p.m. The 32-truck field will take the green flag shortly after 8:30 p.m. with live coverage on FOX, the Motor Racing Network (Radio) and SiriusXM NASCAR Radio (Satellite Radio, Channel 90). All times are local (Eastern
Grant County Mulch Racing PR

Hill Extends His Points Lead with Top-10 Run at Charlotte

Kraus Goes To School In First Visit To Charlotte