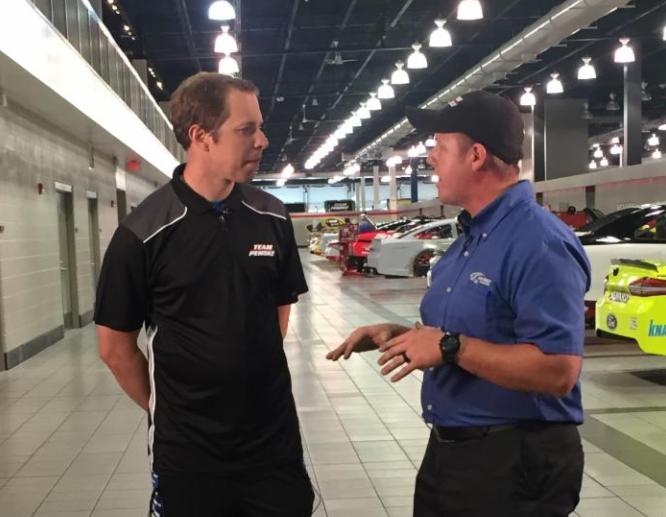 Team Penske, winners of 20 combined victories thus far in the 2018 race season across NASCAR, INDYCAR, IMSA and Australian Supercars – including its 17th Indianapolis 500 win, currently employs more than 50 NASCAR Tech graduates. Team Penske has relied on NASCAR Tech to deliver highly-trained automotive technicians for more than a decade. NASCAR Tech graduates now working at Team Penske hold positions ranging
from entry level mechanic to Chief Mechanic.
Keselowski, the 2012 Monster Energy NASCAR Cup Series Champion, and driver of the No. 2 Discount Tire Ford Fusion in the Monster Energy NASCAR Cup Series, said he truly appreciates the vital importance of the training his teams’ technicians and crews receive during their time at Universal Technical Institute’s NASCAR Tech campus.
“We love seeing NASCAR Technical Institute graduates join Team Penske,” said Keselowski. “I have two on my team right now, and we’re very proud to see them move up through the ranks at Team Penske and to have this relationship with Universal Technical Institute and NASCAR Tech.”
Logano, the 2015 Daytona 500 Champion, and driver of the No. 22 Shell-Pennzoil Ford Fusion in the Monster Energy NASCAR Cup Series, says NASCAR Tech graduates make a difference for his teams’ performance, on and off the race track.
“Our front end mechanic is a graduate from NASCAR Technical Institute,” said Logano. “Winning races takes more than a driver and a crew chief. It takes a whole team of people to put this all together, which is why it’s so important for me to have graduates from NASCAR Tech bring their skill sets to work on my race car.”
Travis Law, a 2006 NASCAR Tech graduate and Chief Mechanic of Josef Newgarden’s No. 1 Verizon IndyCar Series Dallara/Chevrolet,has worked with Team Penske for 10 years. He grew up around racing in Iowa, and was building cars as a hobby when he was a teenager. But Law knew he wanted to make a living working on race cars. He was among the first wave of NASCAR Tech students hired at Team Penske, setting the bar high for the graduates who followed in his footsteps.
Law started as a tire specialist, worked his way up to mechanic, and then became an IndyCar chief mechanic in 2014.
“I loved racing and wanted a career in it,” said Law. “NASCAR Tech was an easy choice. I knew it would be the gateway into racing and it was going to open doors for me.”
NASCAR Technical Institute is the exclusive educational provider for NASCAR and the only campus in the country to offer NASCAR-endorsed training. NASCAR Tech’s Mooresville, N.C. campus offers the standard Universal Technical Institute core automotive training program, with an optional 15-week elective to train students preparing for a career in motorsports. The 15-week elective trains students in everything from engines, fabrication, and welding, to aerodynamics and pit crew essentials. Through NASCAR Tech’s elite Spec Engine program, select students have the opportunity to build engines that will compete in NASCAR-sanctioned races.
Breaking Limits for NASCAR Technical Institute PR