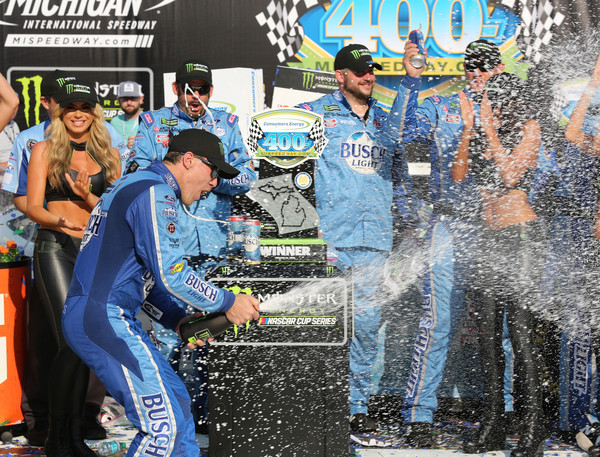 The Consumers Energy 400 featured varying strategies by the teams throughout the race. The crew chiefs used the stage breaks to make pit calls to get their driver out front. In the end, Kevin Harvick and his team made the right call to take home the checkered flag.

Harvick was the dominating force in the Consumers Energy 400 as he proved to the be the most consistent driver the entire day. He claimed wins in the first two stages and then closed it out during the final stage. During a series of green flag pit stops in the final 30 laps, he surrendered the lead. But after all the cars made the pit stops, it was Harvick out front.

Harvick held the lead right through the checkered flag to claim his series-high seventh race win in 2018. It marked his second win at MIS. After this win, Harvick and his team are still motivated to keep winning races this year.

“Well, they’re motivated, and I think as you look at it, we’re three weeks away from the playoffs, and you don’t want it to shut off, you want it to keep going,” Harvick said. “The motivation is to not let things slip through the crack, and they’re covering all the details, and especially my group of guys that we’re going on our fifth year together. That experience and those attention to details of things that they do is second to none, and you see it week after week.  You look in the win column, and we’re capitalizing on those fast cars that hasn’t always happened over the last four years, and I think this year we’re making those moments count and getting wins out of them.”

Harvick had a special ride to Gatorade Victory Lane. The race winner stopped at the start-finish line to celebrate with the fans and his son, Keelan, made his way out to give his dad a hug. Keelan got the checkered flag and then got a special lift into the “passenger” side of the car for the ride to Victory Lane.

“It was pretty cool today,” Harvick said. “We got to go celebrate together. He’s been with me for the last three weeks, so we’ve had a big time. It’s pretty cool to look over there on your victory lap and see your six-year-old in the passenger seat and being able to enjoy it with you. That was definitely way up there on the bucket list of things that you didn’t expect. That was pretty neat.”

Austin Dillon was in second place until he suffered a flat tire on Lap 198. He was able to make it around to finish fourth. Michigan native Brad Keselowski overtook Dillon to finish second. Kyle Bush finished third and Ryan Blaney ended the race in fifth. Erik Jones from Byron, Michigan came home 13th after two early spins.

Denny Hamlin started the race on the pole and led the first 13 laps. Jones brought out the first caution when he spun coming off turn four on lap 10. On the restart, Harvick jumped to the lead before Kyle Busch moved to the front. After a William Byron and Martin Truex Jr. spin, it was Kyle Busch at lead. On lap 30 it was Harvick back at the front. He held that spot until the end of the first stage.

After his spin in stage one due to contact from Byron, Truex Jr. found himself in the lead in the second stage. He held that spot for 25 laps before Harvick regained the lead, a position he would not give up the final 11 circuits to win his second stage of the day.

Michigan International Speedway will continue to be a premier racing facility in 2019 when it hosts a pair of Monster Energy NASCAR Cup Series races in 2019. NASCAR’s most entertaining track will host the Monster Energy Series on June 9 and Aug. 11.

The Monster Energy NASCAR Cup Series FireKeepers Casino 400 is on June 9. The series will return on Aug. 11 for the Consumers Energy 400.