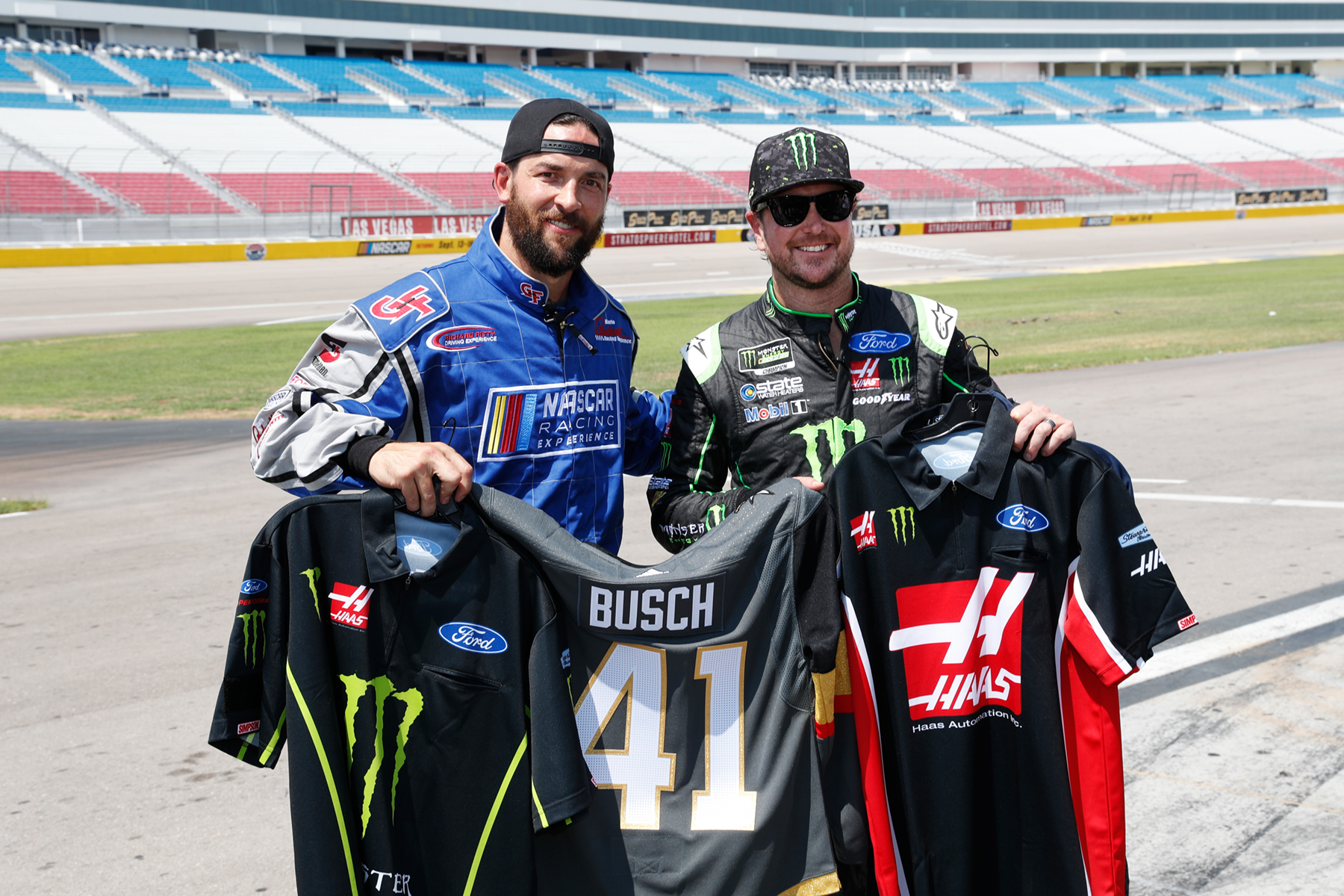 Busch, a Las Vegas native who won the Cup Series championship in 2004, got a hockey skills tutorial from Engelland and Golden Knights TV commentator Shane Hnidy at City National Arena in the morning, then took the hockey stars on a spin around the 1.5-mile superspeedway before a round of media interviews at the track. Busch also gave rides to legendary broadcaster Brent Musberger and Las Vegas sports betting icon Jimmy Vaccaro – major players in the South Point-based Vegas Stats and Information Network (VSiN) – during the outing.

“Man, I was way out of my element there,” Busch said of his hockey tutorial. “I was trying to skate and handle the puck (at the same time), and I have mad respect for those guys out on the ice. It’s fun and is a really unique sport I need to learn more about.”

Busch was one of the thousands of sports fans who were all in with support for the Vegas Golden Knights during their magical run to the Stanley Cup Finals, and he even got to ring the team’s rally siren during the series.

“Growing up here as a kid, we never had a professional sports team, and then now they made it to the Stanley Cup Finals in their first year,” Busch said. “They’ve set the tone, it’s awesome and it’s great to see the city really embracing sports all the way around.”

After Busch showed them the best lines to take around the track with ride-alongs that approached 160 miles per hour, Engelland and Hnidy got behind the wheel of their own NASCAR Racing Experience stock cars for some hot laps.

“It was quite a rush,” said Engelland, a Las Vegas resident for more than a decade. “To be able to experience this whole thing with such an incredible driver in NASCAR is an experience I won’t forget. It was a lot of fun.”

Engelland gained a new respect for the stamina NASCAR drivers must have to compete in extreme conditions at the highest level.

“I only did a handful of laps, and my arms are killing me,” Engelland said. “So, to have to do it for an entire race with 40 other cars out there is a whole other ballgame.”

The athletes also participated in a jersey swap, with Busch getting a No. 41 Vegas Golden Knights jersey from the team and Engelland taking home LVMS, Monster and Stewart-Haas Racing shirts to commemorate the experience.

Various ticket packages, fun extras and special-access passes for LVMS’s second NASCAR weekend of the year are available at www.lvms.com or by calling 1-800-644-4444.