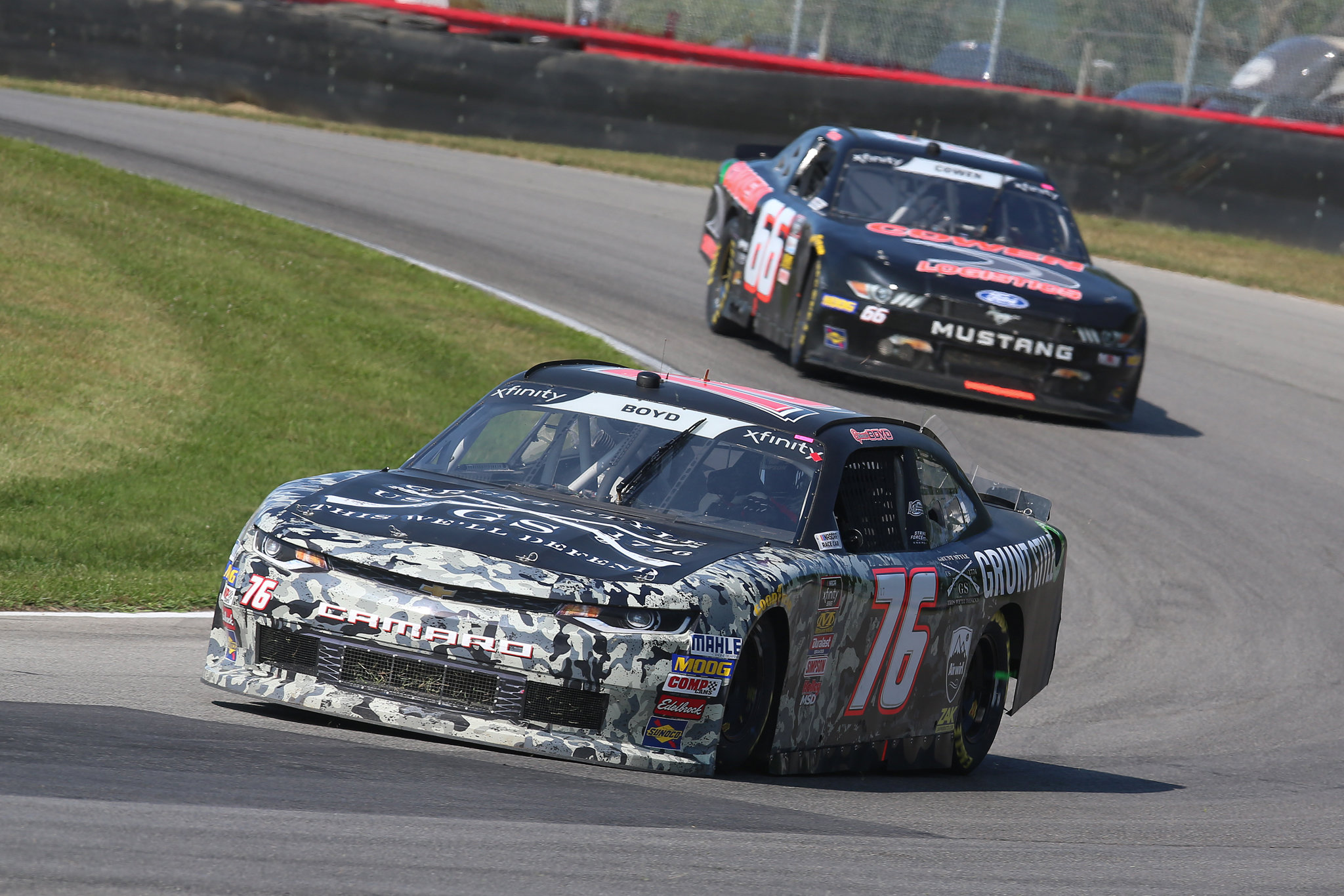 The NASCAR Xfinity Series made a trip to Mid-Ohio Sports Car Course for its second of three road course races this month. Coming off a solid performance at Watkins Glen International, Boyd was ready for some more right turns this weekend.

The weekend started off a little bit rough for the No. 76 team as they experienced some engine issues Friday during first practice. The team worked tirelessly, along with the aid from fellow teammate Joey Gase’s crew, for nearly an after the garage closed to insure the issue was resolved for race day.

Boyd would roll off from the 35th position for the Rock N Roll Tequila 170 Saturday afternoon. Caution was displayed before the cars were able to complete lap one after the 55 of Dylan Murcott lost brakes. Boyd ran stage one extremely conservative, making sure to stay on track and learn the track before really pushing his car. He may have even been a little too conservative. With less than five laps remaining in the stage, the leaders were threatening to put the Grunt Style Chevrolet one lap down. Boyd was told to pick up the pace and do everything he could to stay in front of the leaders. He did just that. Boyd got up on the wheel, picked up his lap times, and remained on the lead lap. Justin Allgaier won the first stage with Boyd in the 32nd position.

Boyd came in for four tires, fuel, an air pressure adjustment and track bar adjustment to help tighten up the Grunt Style Chevy. After an excellent pit stop by the Grunt Style Gladiators, Boyd would restart in the 29th position for the second stage. On lap 29 caution came out for the 39 of Ryan Sieg after his engine expired. Several cars had trouble during the second stage running off track or getting spun around, but Boyd continued his approach of racing the track and concentrated on hitting his marks. After getting into a rhythm, Boyd was able to string together some of his best lap times of the day and worked his way up to the 25th position. Austin Cindric won the second stage with Boyd in the 25th position.

After another solid stop, Boyd would start the final stage in the 24th position. The restart was extremely aggressive, so Boyd again elected to be conservative. In doing so, the No. 76 fell back on the restart, but Boyd picked cars off one by one as the run went on. Caution would once again be displayed on lap 59 after the 9 of Tyler Reddick had a tire go down. The final caution would wave on lap 66 after the 15 car of Katherine Legge blew up in turn nine. After some last lap fireworks between Ross Chastain and Joey Gase, Justin Allgaier grabbed the checkered flag and Spencer Boyd brought home the Grunt Style Chevrolet in the 25th position.

After the race Boyd reflected, “That was a blast. Although this was only my second road course race, I really enjoy this style of racing. My main goal of the day was to just race our own race and stay on track. My guys had to put in a lot of extra hours this weekend after we had some issues in practice, so I have to give them a ton of credit for all their hard work. We will absolutely take this and get ready for Bristol.”

After yet another top 25 finish at Mid-Ohio Sports Car Course, Boyd has now finished in the top 25 in eight of his last nine races. Boyd remains 22nd in driver standings. The Xfinity Series will take a break from road course racing action, as it heads back to Bristol for a Friday night under the lights race in Thunder Valley. Coverage of the Food City 300 will begin Friday August 17th at 7:30 pm ET.