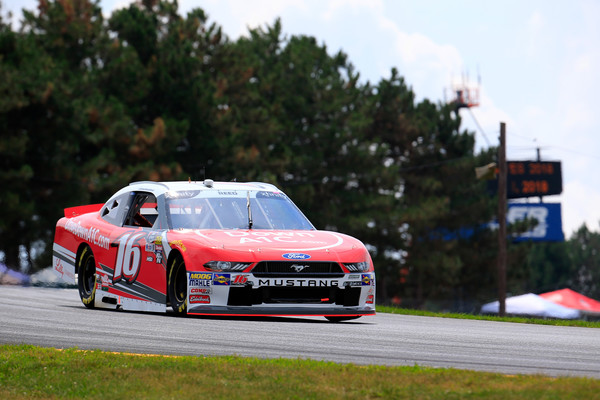 Ryan Reed crossed the finish line 10th at Mid-Ohio, earning his best finish at the road course and his third straight top-10 finish.  Reed had the No. 16 Drive Down A1C Lilly Diabetes Ford on top of the speed charts in practice on Friday and followed it up with an 11th-place qualifying effort.  During the race, Reed took one self-inflicted trip through the grass, but rebounded and was a consistent factor in the top 10 during the 75-lap event.

“It was an up and down day,” said Reed.  “Driver error put us in the back half way through the race, but we battled back to another top-10 finish.  We are taking a break from right turns next weekend and heading to Bristol.  Hopefully we can keep our momentum and knock out a top 10.”

With rain clouds looming, the No. 16 made the most of first practice on Friday afternoon.  Reed set the fastest time for the session and got the No. 16 Drive Down A1C Lilly Diabetes Ford dialed in for the race.  The rains came as predicted, leaving many teams to opt out of final practice, including the No. 16.

Reed started the race 11th and steadily progressed over the opening 20-lap stage, working his way up to eighth before pitting prior to the stage end for tires and fuel.  The rest of the field pitted at the stage break and Reed took the green for stage two seventh.

The driver maintained his track position over the course of stage two and once again pitted shy of the stage break for fuel and tires.  The rest of the field pitted at the stage break and Reed lined up second for the final stage.

Shortly into the final stage Reed took a trip off the track surface and through the grass.  He quickly returned, but due to off-roading, dropped from the top 10 to 28th.  Reed spent the rest of the race making up lost ground and in the end worked his way forward for a top-10 finish.