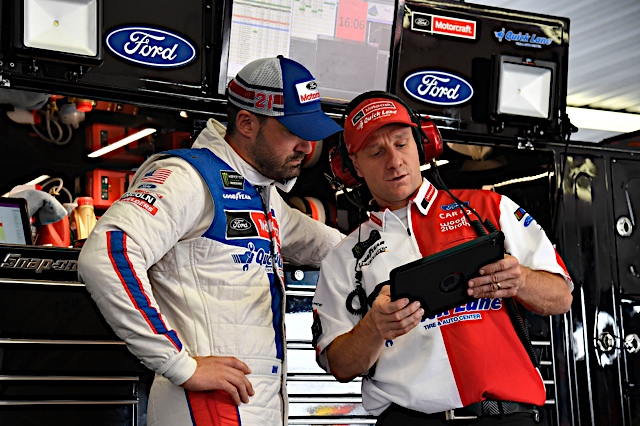 Paul Menard and the No. 21 Earn While You Learn/NewFordTech.com Ford Fusion are set to start 14th in Sunday’s Consumers Energy 400 at Michigan International Speedway.

Friday’s qualifying session marked the 10th time in 23 race weekends this year that Menard has qualified 14th or better.

Menard and the No. 21 Earn While You Learn/NewFordTech.com team achieved their goal of unloading a fast Ford Fusion. He was 10th fastest in Friday’s opening practice session with a best lap at 201.337 miles per hour.

In the first round of qualifying he was seventh fastest with a lap at 200.719 mph.

In the second round, his lap was tracking similar to the fastest cars until he reached Turn Three. Even with the drop in speed in that portion of the track he still was able to top 200 miles per hour, and his official lap at 200.814 mph was faster than he ran in Round One.

Eddie Wood said that despite being unable to advance to the final qualifying round he feels good about where the team is with its preparation for Sunday’s race.

“The car has good speed,” Wood said. “Paul was running right there with [eventual polesitter] Denny Hamlin and got tight in the middle of Turn Three and off of Turn Four.

“But they have two practice sessions tomorrow morning to fine-tune it. We’re confident so far.”

Sunday’s Consumers Energy 400 is set to get the green flag just after 2:30 p.m. with TV coverage on NBCSN.