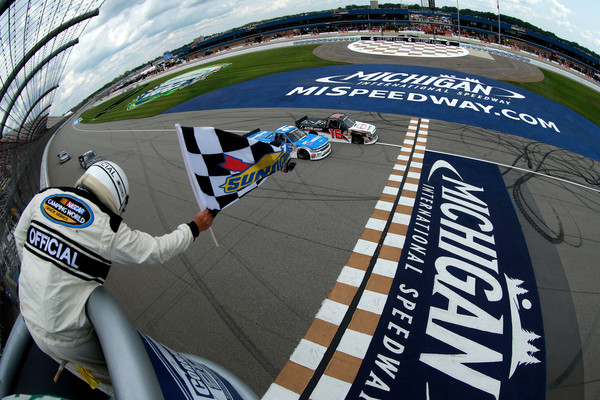 The racing in the NASCAR Camping World Truck series at Michigan International Speedway is known for its exciting action and late race passes for the lead. The Corrigan Oil 200 lived up to expectations as Brett Moffitt used a last-lap pass to earn the victory.

Moffitt trailed Johnny Sauter with five laps remaining, but used a unique strategy to pull off the win. He backed up to the third-place truck. The trucks were able to use the draft to their advantage today and Moffitt used it to perfection at the end of the race. Moffitt used a push from John Hunter Nemechek to gain the momentum to track Sauter back down.

“The whole last however many laps that I was behind him, I was running wide open and I would push him with that air bubble between our bumpers so I tried to back up (turn) one and let him get out there a little bit,” Moffitt said. “I knew the 8 (John Hunter Nemechek) was behind us and I was hoping he would get to us and be able to push us. I was able to plan it right and play it right – it’s just great to get here.”

As Sauter and Moffitt took the white flag, it was Sauter still out front. Sauter led all the through turn three. In turn four, Moffitt stuck the nose of his truck under Sauter and from there it was a drag race to the finish. At the finish line, it was Moffitt by 0.025 seconds.

The victory was the second win for Moffitt at Michigan International Speedway. In 2016, Moffitt went three-wide into Turn 1 on the last lap in order to capture the top spot and his first-ever win in the NASCAR Camping World Truck Series. He used a similar move Saturday to return to Gatorade Victory Lane.

Nemechek started on the pole position for the Corrigan Oil 200 after posting a speed of 184.044 MPH during qualifying earlier in the day. He garnered the top starting position by 0.004 MPH over Todd Gilliland who rolled off second.

Nemechek grabbed the early lead and paced the field for the first four laps. The 20-lap first stage saw four leaders in the early going as the drivers battled for the front. But Stewart Friesen showed his mettle by leading the final seven laps of the stage. He took the checkered green and white flag to claim the stage.

The second stage had more side-by-side racing as the intensity continued to increase throughout. Matt Mills brought out the caution when he got loose and hit the wall. Then Justin Fontaine scraped the wall to set up a one-lap shootout. It was teammates Grant Enfinger and Myatt Snider battling to earn the stage win. Enfinger got the front of his truck to the line first to win the second stage.

Denny Hamlin will lead the field to the green flag for the Monster Energy NASCAR Cup Series Consumers Energy 400 on Sunday. Hamlin swept all three stages in qualifying to win his first pole at Michigan International Speedway. Michigan natives Erik Jones and Brad Keselowski will start fourth and 18th, respectively. Hamlin will go for his third career Michigan win on Sunday while Keselowski and Jones are looking for their first victory at MIS.

The fan plaza features live music entertainment and strolling street performers for guests to enjoy as they prepare for the race. In addition, guests can enjoy a wood carving show.

Hill Takes the Points Lead After Top-Five in Las Vegas