An Hour of Power at Charlotte Motor Speedway 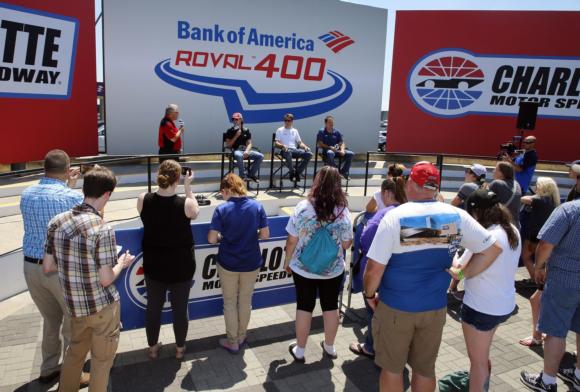 Ryan Blaney relished a unique opportunity on Wednesday at Charlotte Motor Speedway, when the NASCAR star got the rare chance to pilot his No. 12 car on public roads during the speedway’s annual Parade of Power. Blaney joined an all-star lineup of drivers including Indianapolis 500 winner Will Power and NHRA drag racing champion Greg Anderson to raise the curtain for Charlotte’s action-packed Fall Season of Speed with a parade from zMAX Dragway and down Bruton Smith Boulevard to the speedway’s infield.

Race fans from throughout the region witnessed the parade, which featured high-speed machinery including Blaney’s NASCAR car, a Top Fuel dragster, a dirt late model, a sprint car, a Legend Car and a monster truck lining up with the speedway’s Toyota Camry pace cars and classic cars from Tommy Pike Customs.

“Parade of Power gives us a chance to prominently display the remarkable collection of race cars that compete at Charlotte Motor Speedway, zMAX Dragway and The Dirt Track at Charlotte,” said Greg Walter, the speedway’s executive vice president. “We’re all about the fans and there’s no event geared toward fans that’s quite like our Parade of Power.”

Following their grand entrances to the infield, Blaney, Power and Anderson took part in a fan Q&A and an autograph session.

“You don’t really get to drive Cup cars down the street pretty often,” Blaney said. “That part was pretty fun. To see all the people in the infield when we got in was special. I had Will Power riding in the passenger seat and he’s never been in a stock car before, so that was pretty fun to see his reaction. It’s neat. I’m up for whatever we can do to help out the speedway and meet some fans.”

The Parade of Power also served as a preview for the inaugural Bank of America ROVAL™ 400 on Sept. 30, the first playoff road course race in NASCAR history – an event Blaney said he’s eagerly anticipating, and one in which Power hopes he can also compete.

“(The parade) is a really cool event,” Power said. “That was my first time in a NASCAR car but I really want to be in the driver’s seat. I need to lobby (car owner) Roger (Penske) to get me out here for the ROVAL™.”

Anderson, a longtime Pro Stock driver at the NHRA’s highest level, said the Parade of Power ushers in the year’s most dramatic racing events.

“It was great to see all these people come out,” Anderson added. “I think they’re anxious for all the fall events we have here. Fall means playoffs and it means more importance to all racing series, not just drag racing. They sense it, they realize it and they wanted to come and see what it’s going to be about.”

Prior to the Bank of America ROVAL™ 400, Charlotte’s Fall Season of Speed roars to life on Saturday, when monster trucks take on a diabolical dirt track course in the action-packed, family-friendly Circle K Back-to-School Monster Truck Bash at The Dirt Track at Charlotte.