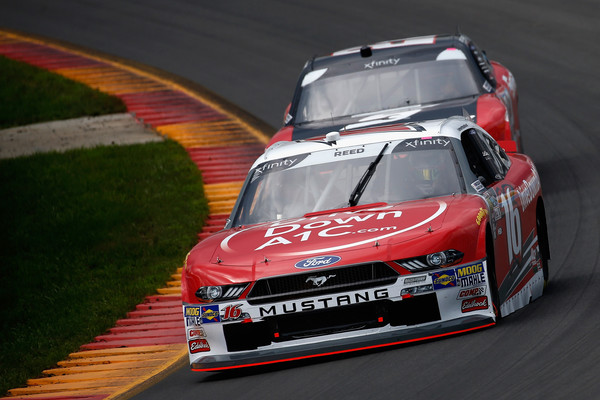 Ryan Reed persevered at Watkins Glen to earn an eight-place finish in his No. 16 Drive Down A1C Lilly Diabetes Ford.  With no practice time on Friday due to rain, Reed hit the track for qualifying and struggled for rear grip.  Reed started the race 19th, held his ground during a rainstorm and by the end was running his fastest laps of the race.

“Our balance wasn’t very good in qualifying and I struggled just having no practice yesterday, so really just tried to get back to my rhythm all race long and keep the thing in one piece and let the race play out and not try to force anything,” said Reed.  “Then we put ourselves in position with some track position at the end and I raced my guts out.  We still have some things to work on.  Our Ford Mustang was a lot better at the end, but we can still keep getting better, but I’m just really proud of everyone on the Drive Down A1C.com Ford because they did not give up.  We were way, way, way off at the start of this deal and just kept digging.  I’m proud of the effort.”

Rain all day Friday left the teams with a decision to make some practice laps in the rain, or opt for no practice.  With no rain in the forecast for Saturday, many teams opted to forgo practice, including Reed and the No. 16 team.  Reed’s first laps at Watkins Glen came during qualifying Saturday morning.  In qualifying Reed struggled for rear grip and after three attempts to advance, was left starting 19th.

Reed reported right from the start of the race that he had no rear grip.  The team took the opportunity in stage one to spend some extra time on pit road removing rear spring rubbers to set Reed up for the remainder of the race.

Reed took the green for stage two 25th and advanced up to 22nd when a rain shower moved over the track.  NASCAR threw the caution for rain and gave everyone an opportunity to pit for rain tires.  The No. 16 capitalized on the opportunity, gaining 11 positions on pit road to line Reed up 11th for the next few rainy laps.

Luckily, the rain shower was brief and after closing out stage two ninth Reed was able to visit pit road and return to slick racing tires.  With different pit strategies playing out, Reed lined up 18th for the final stage.  On lap 51 Reed made his final pit stop of the day for a splash of fuel and was on his own to close out the 82-lap race.  Reed survived a few cautions in the closing laps to race his way to eighth, a career best finish at Watkins Glen.