Rain or Shine: Boyd Survives Wild Race at The Glen 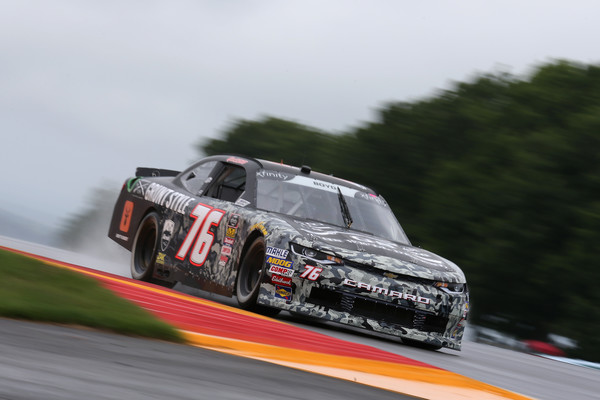 The NASCAR Xfinity Series made a stop up North, by the Finger Lakes region, for its first of four road course races of the season. Boyd was excited for his first road course race, but was not really sure what to expect going into the weekend.

The weekend started off with a couple rainy practice sessions on Friday afternoon. Most cars elected not to practice in the rain, but per NASCAR rule book, all rookies were required to make at least one lap of practice. Boyd tiptoed his way around the rain soaked track of Watkins Glen International for a couple laps before calling it a day.

Saturday, Boyd experienced some brake problems during qualifying and would roll off from the back of the pack for the start of the Zippo 200. It only took five laps for the first caution of the day, after the 78 of Tommy Joe Martins lost brakes and crashed. Boyd was still uncomfortable with the feeling of his brakes and was told to pump them up. The rest of stage one was all about getting into a rhythm for Boyd. Spotter, Chris Monez, encouraged Boyd to drive his car harder as he got more comfortable with his braking and shifting points. Joey Logano won the first stage with Boyd in 34th.

After some debate back and forth between Boyd and Crew Chief Jason Miller, the call was for Boyd to stay out under caution and take the wave around to get back on the lead lap. Dark clouds rolled in and rain was sure to play a factor before long. On lap 26 caution waved for the third time of the day as the 2 of Matt Tifft and the 24 of Justin Haley tangled. The rain began falling and it was time for rain tires to come into effect. Boyd pitted for four rain tires, a windshield wiper, fuel, and was sent back out on track. Boyd managed to battle his way up to the 19th position before caution once again waved for the 01 of Vinnie Miller into the tire barriers. A brief red flag was displayed for clean up in turn one and repair to the tire barriers. With just 2 laps remaining in the second stage, Boyd played it conservative. A.J. Allmendinger won the second stage with Boyd in 25th.

The rain stopped and the track was drying before the start of the final stage. Boyd came into pits for four (slick) tires and fuel. Boyd got back into his rhythm and rode comfortably in the 25th position for the majority of the final stage. On lap 66, Boyd made a two-tire pit stop under green flag conditions and on lap 67 caution waved for the 45 of Josh Bilicki, which trapped Boyd one lap down to the leaders. The final caution waved on lap 72 for the 8 of Scott Heckert. Joey Logano scored the victory after his teammate Brad Keselowski spun trying to catch him in the final laps. Despite being a lap down, Boyd managed to pick up a few more positions in the closing laps to bring home the Grunt Style Chevy a 24th place finish.

After the race Boyd reflected, “What an experience! That was some of the most fun I’ve ever had, racing out there in the rain. I was honestly hoping that it was going to keep raining because we really weren’t that bad under the wet conditions. Coming into the weekend, I really had no idea what to expect, but I really enjoyed myself out there. We’ll absolutely take this result, and get ready to do it all over again at Mid-Ohio next week.”

After a 24th place finish at Watkins Glen International, Boyd has now finished in the top 25 in seven of his last eight races. Boyd remains 22nd in driver standings behind his teammate Joey Gase. The Xfinity Series will head to Mid-Ohio Sports Car Course next weekend for the second road course race of the season. Coverage of the Rock N Roll Tequila 170 will begin Saturday August 11th at 3:00 pm ET.