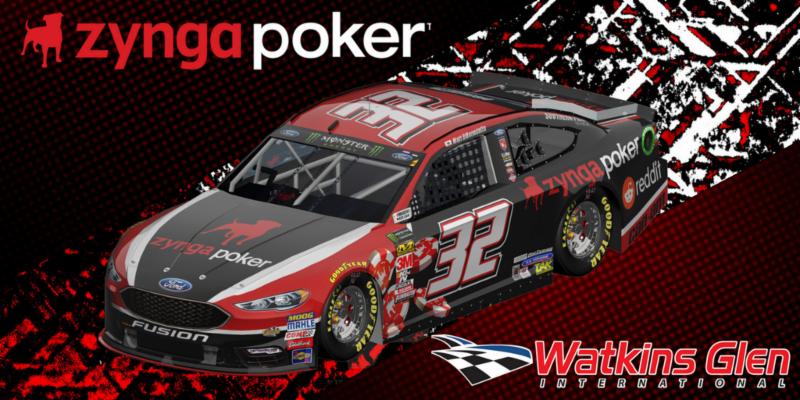 This weekend, Matt DiBenedetto and the Go Fas Racing team will head to the second road course race of the season for the Monster Energy NASCAR Cup Series. Sitting at 2.54 miles long, Watkins Glen International is a historic road course located in Watkins Glen, New York. With eight corners, large elevation changes, and both left and right-handed corners with a scenic backdrop, Watkins Glen is a fan-favorite and has nearly sold out for the fourth straight season. Zynga Poker will be the primary sponsor for Matt DiBenedetto and the No.32 Go Fas Racing team for the GoBowling at The Glen race.
Some Right Turns:
Matt DiBenedetto may not be known specifically as a road-course ace, but he usually runs well at them. Coming off a 17th-place finish at Sonoma earlier this year, confidence is high for the 27 year-old California-native.
While his average finish in three races at Sonoma is 23rd, he has had a harder time getting the results at Watkins Glen. His average finish at “The Glen” is 31st, which is 18th out of the 23 tracks currently on the NASCAR schedule, however, it is not due to a lack of pace. DiBenedetto has raced there three times but gotten caught in an incident in 2016 which dropped his average. His other finishes, 26th and 28th, are more indicative of his speed in past years and DiBenedetto hopes that he can bring that average even further down this weekend.
Last Week For the No.32 Team:
Last weekend, the Monster Energy NASCAR Cup Series was at Pocono Raceway. Pocono Raceway, the only track on the NASCAR schedule with only three corners, is a 2.5 mile with high speeds and three unique corners. DUDE Wipes was the primary sponsor for Matt DiBenedetto, making their NASCAR debut as a sponsor on the No.32 Ford.
DiBenedetto and Crew Chief Randy Cox worked together in both practices on Saturday to find speed for Sunday’s 400-mile race, and earned a starting spot of 18th after qualifying and technical inspections were complete.
The DUDE Wipes No.32 Ford stayed on the lead lap most of the race, and restarted the final restart just outside the top-20. Unfortunately, the lane DiBenedetto started in for the final restart jammed up, causing DiBenedetto and the DUDE Wipes Ford team to lose a few spots on the restart, finishing 27th, on the lead lap, a solid-result for the Go Fas Racing team after several races in a row of bad luck at Pocono.
DiBenedetto on racing at Watkins Glen International:
“Watkins Glen is a must-see for any NASCAR fan. Not only is it a historic racetrack, but it produces some of the best racing of our entire season. It’s a lot of fun as a driver because it is so high speed and there is always a lot of contact with the other cars, it’s pretty unavoidable. I didn’t really know what our speed would be like this year at the road courses, but Sonoma gave me a good preview of what we can expect at Watkins Glen. Our new Brembo Brakes package has been phenomenal this year and allows us to out-brake just about everybody. It really gives me the confidence to push the heavy braking zones and know that I’ll have a pedal throughout the race. That, packaged with the speed that [Crew Chief] Randy Cox showed we can have at Sonoma earlier this year, proves that we can have a really good run this weekend if we can keep the fenders on our No.32 Zynga Poker Ford. I might not have a road racing background, but I am very confident in my abilities there and have always run well at them. Hopefully we can bring home a top-20 for Zynga and pull closer to the guys ahead of us in the points standings.”
Matt DiBenedetto Career Monster Energy NASCAR Cup Series Stats at Watkins Glen International:
Starts: 3
Average Start: 33rd
Average Finish: 29th
Best Finish: 27th (2015)
Go Fas Racing PR