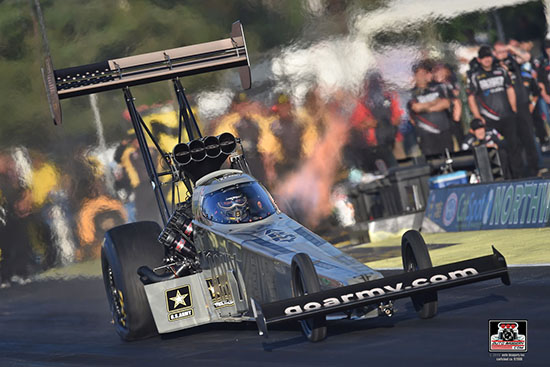 Schumacher and his U.S. Army Dragster team for Don Schumacher Racing (DSR) rolled into the Western Swing finale looking to close it out with a record-breaking triumph in Seattle. “The Sarge” is tied with Joe Amato as the winnginest Top Fuel driver at the track with four event wins and is coming off his fourth final appearance of the season last Sunday in Sonoma, California. The eight-time Top Fuel world champion posted a solid lap of 3.804 seconds at 325.45 mph to close Friday afternoon’s opening session and came back with a run of 3.751 seconds at 327.03 mph to move up to fourth in the provisional ladder.

“Today was a good day for the U.S. Army team,” said Schumacher. “We had the goal to come in here and make a change or two. We have an amazing race car, but it’s just a little sporadic at a certain spot. (Crew chief) Mike (Neff) and (assistant crew chief) Phil (Shuler) came up with a game plan and I think the game plan has worked. Now we just have to bring it all in. We had two really good runs down the race track today. We had the third-best run in that second session with the sun out and Man, it was difficult to see. We made a really good run with the changes we made. Having a package we can race with is so important. Mike’s goal was not to go the fastest, but instead learn how to race on Sunday. I think he learned a lot on those two runs that we needed to learn. What I’m most impressed with is that he said, ‘we got to make this change’ and we stuck with that plan. That’s progress and hopefully we’ll make more tomorrow.”

Brown returned to Pacific Raceways with an eye on continuing his recent run of success at the track aboard the Matco Tools/U.S. Army Dragster for DSR. The 2016 and 2017 NHRA Northwest Nationals Top Fuel winner jumped to the top of the ladder midway through the first session with his impressive pass of 3.761 seconds at 326.48 mph. The three-time Top Fuel world champion closed qualifying Friday night a run of 3.763 seconds at 330.80 mph to hold the fifth position heading into Saturday.

“Man, Q2 got us,” Brown said, last year’s No. 1 qualifier in this event. “It blew through the clutch on us. We stepped up the tune-up and ran out the back door as quick anyone did. It needed more. We’ll be good. I felt really good in Sonoma. We made some good adjustments last week and the car was really good. We qualified in the top-three down there and tomorrow we have a chance to move up in there again. The weather is going to give us good conditions and the good part is that we are already up in the top-five. This Matco Tools/U.S. Army team is just having fun together right now and we can make moves with the car and it’s doing what we want it to do. We’re going to come out tomorrow and be better, get better and see what we can do.”

Pritchett and her team continued to show growth after losing traction early Friday in her first run behind the wheel of the Sparkling Ice/U.S. Army Dragster /U.S. Army Dragster for DSR. The official time of the lap was 8.044 seconds at 87.50 was 15th of 15 cars to make a lap in the opening session. She came back with a run of 3.764 seconds at 321.73 mph to jump up to the sixth slot.

“I feel great being surrounded by this team,” said Pritchett. “The strategy is to always have that solid run to open qualifying and build from there, but even though that didn’t happen for us today I really like the way we came back with that second pass. We went down the track and put a hole out, but definitely are headed in the right direction by leaps and bounds from Q1. The Sparkling Ice/U.S. Army machine is bright just like the future for this team. Speaking of bright, that sun in Q2 was one of the most intense situations we see out there. The clouds broke, and the sun was hitting your visor just right. From the time you fire up, do your burnout and get back in to stage all you could see were shadows. Everything just gets more particular in that run. That’s what is unique about Seattle and what’s unique about what tuners do and what drivers do to adapt to certain situations to make sure the car can run consistent no matter what’s going on. We’re picking away at it. (Crew chief) Tod Okuhara already has a game plan for Q3 and that’s all I need.”