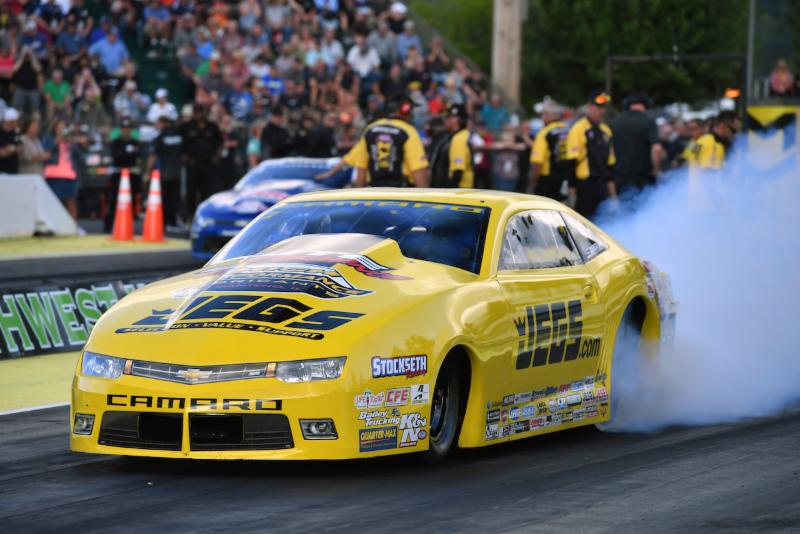 The tour’s most recent Pro Stock winner, five-time class champion Jeg Coughlin Jr., is running so well at this weekend’s 31st annual CatSpot Organic Cat Litter NHRA Northwest Nationals that one of his rivals filed a protest with the sanctioning body. But it turns out hard work is the only thing happening in the JEGS.com/Elite Performance Chevrolet Camaro camp, so the $1,000 protest money was given to Coughlin after his car was found to be completely legal.

By rule, any competitor can challenge the legality of any other car, but they have to stipulate how the accused party is cheating and pay a $1,000 fee. Just after Coughlin ran a class-leading 6.501 at 212.16 mph Friday night to earn the No. 1 qualifying position, Chris McGaha decided Coughlin and teammate Erica Enders must be breaking the rules, putting up $2,000 to file a protest on each driver’s car. Both vehicles were thoroughly inspected and subsequently deemed legal, so Coughlin and Enders were given the cash.
“Not sure what was going on there but we’ll chalk that up as a flattering experience and enjoy a little party money for Saturday night,” Coughlin said. “Yeah, it’s kinda funny. I guess you look at it after racing for 30 years, we’ve been torn down and checked by the NHRA Tech department many times and never had an issue.
“This is the first time in my career where we had an official protest against me and my team and, obviously, we weren’t concerned about anything because the NHRA does a great job in both writing the rules and supporting the rules with all the competitors. They had a look, found nothing wrong with what we’re doing over here, and that was the end of it.”
This is Coughlin’s 25th career No. 1 qualifying effort and it comes on the heels of his third Pro Stock win of the season, which happened last weekend in Sonoma. Coughlin also won Pro Stock in Englishtown and Bristol, and he even took the Super Comp trophy in Richmond. Overall, he now has 80 career wins, 61 in Pro Stock and 19 in various Sportsman categories.
“We’ve made some great runs in qualifying here and we’re excited to continue the momentum from Sonoma,” Coughlin said. “We opened Friday with a great 6.505-second pass and ended up No. 2 after the first session. We came back in the evening session and the track was cooler so we were hoping to tap into the 6.40s but we ran the 6.501 and that was good enough to move us up to No. 1 and keep us there.
“I feel good about the efforts the team has done R&D-wise on the new engine program over the last month or so. We put a new bullet (engine) in our car last weekend and won the race. Now we’re No. 1 here. We are still refining it a little bit and I feel great behind the wheel so I look to have a good clean day tomorrow and see if we can’t ring up four more round-wins and another huge victory tomorrow.”
Race day will start with live action on the main FOX network with Coughlin taking on No. 16 qualifier Joey Grose, who posted a best pass of 6.708 at 206.80 mph.
Team JEGS PR