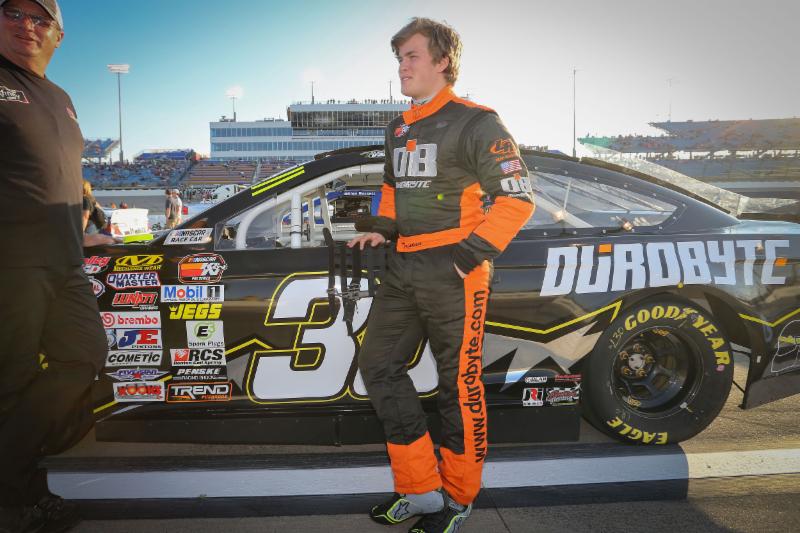 After delivering his third straight top-15 performance with a 14th place run at Iowa, Van Wieringen says he has reasonable expectations for his K&N debut at the 2.450-mile road course – especially after participating in Chris Cook Performance driving school in Arizona earlier this week.
“I’m excited for this new challenge but I’m trying to keep our expectations realistic for our No. 30 Durobyte Ford Fusion this weekend at Watkins Glen,” said Van Wieringen.
“I learned a lot at the Chris Cook Performance driving school and I’m hoping all of those techniques will be useful during practice, qualifying and the race. I keep telling myself if I’m able to keep our Rette Jones Racing race car on the track, it’s going to be a solid day.”
One of the elements to road course racing is being able to compete in both dry and wet conditions.
With a forecast of rain throughout the day on Friday – and the addition of rain tires available to the teams – Van Wieringen says the chance of precipitation throws a different wrench into the mix when it comes to preparation and execution.
“I’ve never raced in the rain before – so that could be very interesting,” he said with a laugh. “I don’t know what to expect. If we do race in the rain, then it becomes a race where we’re battling the track and not necessarily the competition around me.
“Road course usually provides a lot of opportunities for strategy and the rain will certainly do that if the forecast holds up. All I’m focused on is doing the best job I can for Rette Jones Racing and Durobyte and hopefully, when that checkered flag waives, we’re in good shape.”
A successful weekend for Van Wieringen and Rette Jones Racing?
The Amherstburg, Ontario Canada native says another top-10 finish.
“It’s going to be tough, but I’d be really satisfied with another top-10 finish,” Van Wieringen sounded. “The race is going to be stacked with some strong drivers – but we’re strong in our minds and we’re determined to go out there and do what we can and give us some confidence heading to the next race at Gateway Motorsports Park later this month.”
Team co-owner Mark Rette says the key to this weekend’s race for Van Wieringen is to enhance his learning curve in the K&N Series.
“It’s very hard to put any expectations on a driver who has no road course experience,” Rette said. “Tristan is a very talented and accomplished race car driver.
“I think his road course debut will have his moments, but his car control should be a good equalizer and hopefully, we can escape the rain and bring home a strong top-10 run with our Durobyte Ford.
“Together, it’s a matter of surviving Watkins Glen and focusing ahead on Gateway in a few weeks.”
In addition to Durobyte, JRI Shocks, Huntilar Corp., Goodridge Fluid Transfer Systems, Ford Performance and Jones Group International will serve as associate marketing partners for Friday evening’s 150-lap showdown.
The Great Outdoors RV Superstore 100 (41 laps | 100.5 miles) is the 11th of 14 races on the 2018 NASCAR K&N Pro Series East schedule. Practice begins for the one-day show on Fri., Aug. 3 from 11:00 a.m. – 12:20 p.m. Group qualifying is set for later at 3:30 p.m. with the race set to take the green flag later at 4:45 p.m. The event will be televised on a tape-delayed basis on NBC Sports Network (NBCSN) on Wed., Aug. 8 at 6:00 p.m. All times are local (Eastern).
RJR PR
Post Views: 193

Get A Case for the Sprecher 150 ARCA Race at Milwaukee Mile; Fans Receive Free Ticket with Every Case of Sprecher Root Beer Purchased at Menards