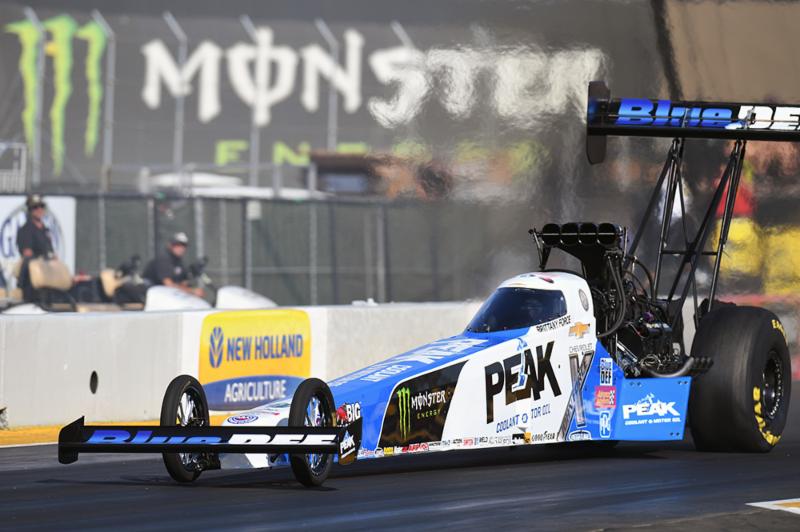 Her reign as Top Fuel world champion has been fraught with frustration but when they raise the curtain on this year’s Countdown to the Championship, no one expects anything but excellence from Brittany Force and the PEAK Coolant and Motor Oil Monster Energy race team.
A graduate of Cal State-Fullerton, Force rolls into Pacific Raceways for this week’s 31st annual CatSpot NHRA Northwest Nationals in eighth place in Top Fuel points, nowhere near where she and crew chief Brian Husen and tuning consultant Alan Johnson expected themselves to be with just three races remaining before the points are adjusted for the Countdown.
Nevertheless, Force knows that there still is time to generate momentum in advance of the playoffs. She also knows that if you’re in it, you can win it. She won last year from a No. 6 starting spot, but she could have won from No. 10 just like John Force Racing teammate Robert Hight did in 2009.
“We’ve got three races left,” said the petite blonde who last season became the first woman in 35 years to reign as champion in NHRA’s premier category. “We still have a lot to figure out on this car but I know this PEAK Monster Energy team is ready for it. I’ve got a lot of help around me.”
After closing the 2017 campaign in dramatic fashion, winning three of the six Countdown races and a closing with a wire-to-wire win at the Auto Club Finals in Pomona, Calif., the second youngest of 16-time world champion John Force’s daughters returned to the track on which she had secured the title with confidence and high hopes.
Instead she got an introduction to the “other” side of drag racing.
Racing in the first round of the 2018 season-opener, she survived the destructive, bone-jarring obliteration of her race car and a trip to the hospital and then, after battling back to earn an emotional victory three races later at Houston with a brand-new race car, she has had to endure the inconsistency of her car that has been great in qualifying but not so great on race day.
It’s a personality quirk that Johnson and Husen again will try to address this weekend.
For her part, the 32-year-old Force is trying to remain upbeat.
“I always try to stay positive,” admitted the nine-time Mello Yello tour winner. “We know we have a car that can compete and we just have to keep doing what we do. For that, there’s nothing better than back-to-back races like we have in the Western Swing. It keeps us all in our routine and moving forward, not just me but every member of this team.
“Our goal is the same as always. We’re just pushing to go rounds on race day and we’re fighting for a win. We got our butt kicked in the second round last week, but we’ll just try to do better this week.”
Although she was nominated this year for an ESPY Award, as her father and older sister Ashley were before her, the 32-year-old Force still believes that there is room for improvement in her game.
“Race wins and championships? Yes, we all want that,” she said, “but in the long run, I want to be a good driver, a better driver, and talking with people like my dad, Robert, Alan, even those I race against, can really be helpful.”
Qualifying at the 31st annual CatSpot NHRA Northwest Nationals begins with two sessions on Friday at 4 and 6 p.m. with two additional sessions on Saturday at 2 and 4:30 p.m. Eliminations are set to begin Sunday at 11 a.m.
JFR PR/Photo Credit: Gary Nastase, Auto Imagery