ROBERT HIGHT AIMS TO DOUBLE-UP AT SEATTLE, SEAL A ‘MODIFIED’ SWEEP FOR CHEVROLET 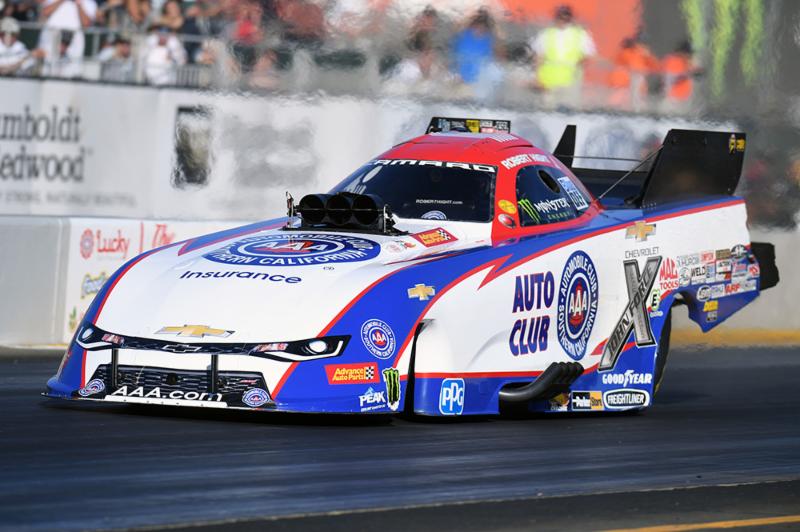 Coming off an impressive win last week at Sonoma, Calif., and entering this week’s 31st annual CatSpot NHRA Northwest Nationals as the defending champion at Pacific Raceways, Robert Hight is looking more and more like a man capable of becoming the first in 15 years to win back-to-back Mello Yello Funny Car titles.
After being caught off guard by NHRA’s early-season decision to change the way it prepares the racing surface at its national event tracks, crew chiefs Jimmy Prock and Chris Cunningham have adjusted their program and settled into a new comfort zone and the 48-year-old Hight couldn’t be more amped up.
“Jimmy and Chris haven’t been happy with our set-up, but they have a good feel for what these cars need,” Hight said. “Normally as the No. 11 qualifier (as he was at Sonoma), you aren’t real confident, but they told me our Auto Club of Southern California Chevy Camaro was going to be just fine.
“They said, ‘it’ll run good’ and you know what? It did. We made four good runs and, in the semifinals, ran low ET of race day at 3.95,” said the 43-time tour winner. “This is the time of year you have to get it together if you want to win a championship and we’re really starting to gel; we’re starting to click.”
A former Auto Club Road to the Future Award winner like JFR teammates Courtney and Brittany Force, Hight enters this week’s race, last of the three-in-a-row that comprise the Western Swing, in third place behind only Ron Capps, whom he defeated in last week’s final, and Courtney.
“We dominated last year,” Hight said of the Northwest Nationals, “and that gave us the momentum to go on and win the championship (for the first time since 2009). For some reason, once you’ve had success at a race, you just get confident. That was our first time winning at Seattle and now we feel like we can do it again.”
If he can, Hight believes it would constitute something of a modified sweep of the Western Swing.
“There has only been one guy to ever sweep the Western Swing (in the Funny Car class),” Hight said, “and that was my boss, John Force, back in 1994 when he just dominated the sport. Right now, though, as a team, Chevrolet is dominating the Swing and if one of these Camaros can get to the winners’ circle Sunday, we can say JFR and Chevy swept the Swing.”
Hight, who made history in 2009 when he won the championship from the No. 10 starting position in the Countdown, knows he won’t have to duplicate that feat to win this time around.
“The last thing you want to be doing this time of year, right before the start of the Countdown, is to be searching for a combination,” he said. “I think we’re peaking at just the right time. We’re coming up to showtime and we know we’ve got a good race car.”
Nevertheless, this may be the most competitive field of Funny Cars in NHRA history but Hight believes that it is essential for his team, and the others that comprise the JFR effort, to continue to work together and not worry about what the competition either says or does.
“There are a lot of cars every week that can win,” he said, “but we can’t afford to focus on what everyone else is doing. All we can control is what we do. For JFR, the key is to keep working as a team toward the common goal, which is another Funny Car championship. When you work together, the learning curve is way less for everyone.”
Qualifying at the 31st annual Cat Spot NHRA Northwest Nationals begins with two sessions on Friday at 4 and 6 p.m. with two additional sessions on Saturday at 2 and 4:30 p.m. Eliminations are set to begin Sunday at 11 a.m.
JFR PR/Photo Credit: Gary Nastase, Auto Imagery