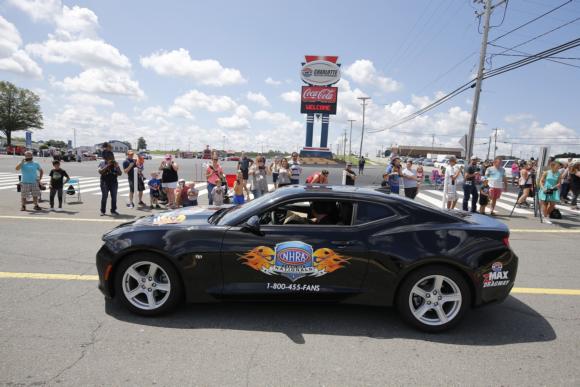 The parade – which begins at zMAX Dragway at noon and concludes in the speedway’s infield – will feature more than two dozen vehicles, including stock cars, Legend Cars, pace cars, a massive monster truck and colorful classic cars.

The FREE fan event also includes newsworthy announcements, a driver Q&A session, free monster truck rides for kids and a chance for 100 fans to attend an autograph session with the drivers. The first 100 fans to pick up a wristband beginning at 8 a.m. on Aug. 8 will receive autographs from Blaney, Power, Anderson and other motorsports personalities.

“Parade of Power gives race fans a special opportunity to see a collection of the machines that will compete at our world-class facilities this fall,” said Greg Walter, Charlotte Motor Speedway’s executive vice president. “Nowhere else can fans see a free parade with special rides including a monster truck, a classic hot rod and the same NASCAR machines that will race on our ROVAL™ – all in one place. Charlotte Motor Speedway is all about the fans and with this year’s Parade of Power, we’re setting the stage for an unforgettable Fall Season of Speed that no fan will want to miss.”

Parade of Power previews premier events including the inaugural Bank of America ROVAL™ 400 on Sept. 30, the first playoff road course race in NASCAR history. Drivers will compete on the 17-turn, 2.28-mile ROVAL™ in a spectacle of speed, strategy and playoff excitement unlike anything on the NASCAR schedule.

The fall fun begins, however, with the Aug. 11 Circle K Back-to-School Monster Truck Bash, an aerobatic, metal-munching, family-friendly exhibition of monster trucks and freestyle motocross at The Dirt Track at Charlotte.

The Sept. 6-9 Pennzoil AutoFair presented by Advance Auto Parts brings every color under the spectrum with an array of classic cars, custom rides and hot rods throughout Charlotte Motor Speedway’s infield for the world’s largest automotive extravaganza.

The Oct. 12-14 NHRA Carolina Nationals at zMAX Dragway gives drag racing fans a full-throttle dose of nitro-fueled, 300-mph competition amid the drama of the NHRA’s Countdown to the Championship.

A dirt-flying, title-deciding showcase of sprint cars, late models and modifieds converges on The Dirt Track at Charlotte in the Nov. 1-3 World of Outlaws World Finals – which brings dirt racing’s most prominent series to a thrilling conclusion.

Charlotte Motor Speedway lights up the night on Nov. 18 with the first night of Speedway Christmas – an awe-inspiring holiday light show spectacular, featuring a Christmas village and more than 3 million lights strewn throughout the speedway’s infield and concourse.