TY DILLON HUSTLES TO TOP-25 FINISH AT THE TRICKY TRIANGLE 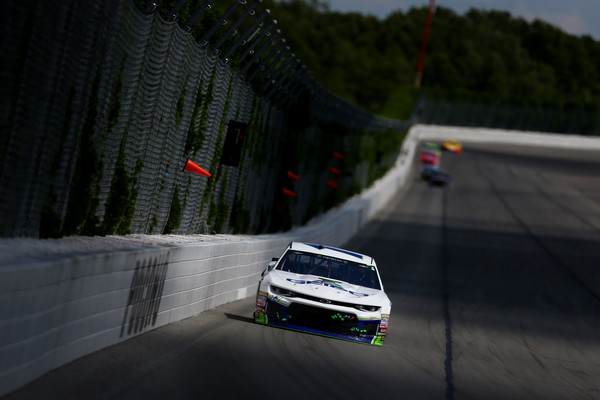 Ty Dillon and the GEICO team arrived in Pocono looking to tame the Tricky Triangle and turn in a solid finish as the 2018 Monster Energy NASCAR Cup Series season continues to march on. The group exercised resilience and was able to turn in a top-25 finish after overcoming challenging obstacles.
Dillon and his No. 13 GEICO Camaro ZL1 were 30th in both practice sessions on Saturday. The Germain Racing team was able to get through tech inspection later that afternoon, while many other teams struggled, which would allow Dillon to start Sunday’s Gander Outdoors 400 on the inside of row 8, from the 15th position.
When the green flag turned the field loose at Pocono Raceway on Sunday, Dillon started his journey from 15th place. He soon encountered tight handling, but, despite the condition, he s
urrendered just three spots and was running in the 18th position when crew chief, Matt Borland, ordered him to pit road for his first scheduled green flag stop of the day on lap 31. Dillon received a major chassis adjustment, four tires and fuel. Unfortunately, during the visit, a tire made inadvertent contact with the jack, dropping the car and causing a lengthy delay as the crew jacked the car back up to complete the stop. When Dillon rejoined the race, he would find himself running in the 31st position as he worked to regain lost real estate.
During stage two, things were seemingly headed in the right direction and it was clear that the Germain Racing crew made proper adjustments, as Dillon reported, “My balance is the best it has been all race.” By the close of the second stage, the young gun had hustled his No. 13 GEICO Camaro ZL1 back up to 24th place and would make a trip down pit road during the break. The pit crew quickly outfitted Dillon with four fresh Goodyear tires, a full tank of Sunoco racing fuel and a wedge adjustment before returning him to the racing surface. No sooner than he had rejoined the field, NASCAR alerted him that he was in receipt of a speeding penalty after being too fast on entry to pit road. The displeased Dillon pleaded his case, but the sanctioning body prevailed, leaving him to restart from the rear of the field when the race returned to green on lap 106.
Undaunted, Dillon began stage three from the 30th position and again set sail for the front of the field. By lap 145, he had the GEICO Camaro back in the top-25, as he continued to claw his way forward with just 15 laps left in the advertised distance. The event would eventually head into overtime and Dillon and his GEICO machine were able to overcome multiple setbacks to finish 24th at the Tricky Triangle.
“Pocono is definitely a hard track to get a handle on. You have to be perfect in each corner on every single lap, and all of the corners are completely different from one another,” Dillon said. “It is a challenge to be able to have a car that’s set up to get through all three turns perfectly. It’s called the “Tricky Triangle” for a reason. We battled with the balance of our GEICO Camaro ZL1 on exit through all of Stage 1 and most of Stage 2. My crew chief and the team were able to get the handling closer to where we needed it to be, but we have to be there from the very beginning. We know that, and this team continues to work hard week in and week out to keep us competitive and moving in the right direction. We are going to keep digging.”
Germain Racing will now pack up Dillon’s No. 13 entry and pay a visit to the scenic Finger Lakes region of New York for the second road course race of the year and race number 22 of the Monster Energy NASCAR Cup Series season.
Ty Dillon and the No. 13 GEICO Camaro ZL1 will hit the track at Watkins Glen International for the weekend’s opening practice session on Saturday, August 4th, at 10:05 AM (ET). Qualifying will follow at 6:35 PM (ET).
The GoBowling at the Glen Monster Energy NASCAR Cup Series race is on Sunday, August 5th, and it will be televised live on NBC beginning at 2:30 PM (ET). The Motor Racing Network (MRN) will carry the live radio broadcast, along with SiriusXM NASCAR Radio, channel 90.
PMI PR/Photo Credit Sarah Crabill/Getty Images
Post Views: 186