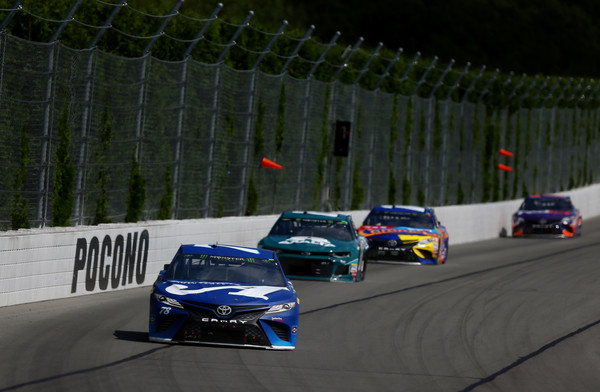 Brake issues and a loose-handling on the No. 78 Auto-Owners Insurance Toyota plagued Martin Truex Jr. throughout the afternoon, leaving him and the Furniture Row Racing team with a 15th-place finish at Pocono Raceway.

“It was a struggle all afternoon with the brakes and we were pretty loose there for a while too,” said Truex. “We never could seem to get the handle on the Auto-Owners Insurance Toyota and it showed in where we finished. We just have to put it away and look forward to Watkins Glen.”

Truex started eighth and maintained the position on the 2.5-mile Tricky Triangle until the first green-flag pit stop on Lap 25. He told crew chief Cole Pearn that the brakes were “squishy” but he maintained the eighth spot after pit stops cycled through by lap 36. A second green-flag stop on lap 47 left the No. 78 Toyota in 23rd place at the conclusion of the 50-lap first stage.

The Furniture Row Racing entry was the leader to start Stage 2 though he quickly dropped a couple of spots after making slight contact with another competitor.

Truex ran fourth from Lap 58 until pitting under green on Lap 76. It was then that debris was pulled away from the right-front brake and there was hope that the braking problems were over.

The No. 78 Toyota ran seventh for the majority of the second half of Stage 2 until Pearn called Truex to pit road on Lap 97. Trouble making an adjustment to the left-front suspension slowed the stop but the timing of the stop put the Team sixth to start the final stage.

The final 55-lap race to the checkered flag found the handling too loose and Truex slipped back to 15th by Lap 115. The handling remained an issue and the brake issue returned as well in the final 30 laps.

The race was red-flagged on the originally scheduled final lap (160) and then ran into overtime with Truex taking the checkered flag in 15th place after four overtime laps (Lap 164).

There were seven cautions for 29 laps and 13 lead changes among 10 drivers.

The next race race is Aug. 5 at Watkins Glen (N.Y.) International where Truex is the defending winner.