Rookies get it done at Tucson Speedway 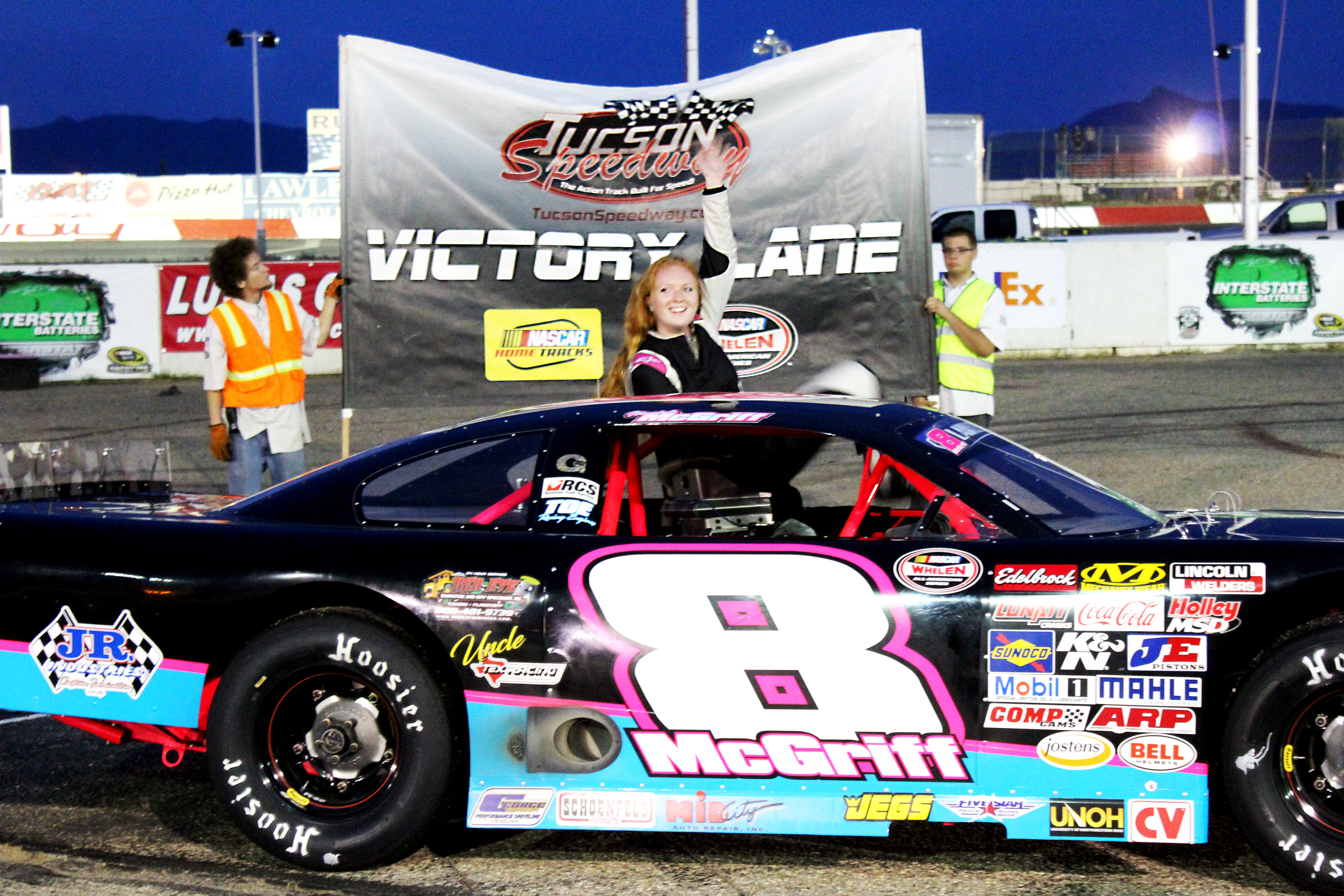 In the Bandit division of the Bandoleros, Rookie Keirstin Jones took the lead at the start of the main event. She lost the lead midway through the race to eight-year-old Rookie Landen Mros.

Bob Santa Maria led 21 Super Trucks to the green flag. Rookies Kole Raz and Sara Houston battled for second until lap nine when Raz had the better of it.

Trucks spinning between turns three and four gathered up no less than six trucks sliding into each other and the wall on lap 17 bringing out the red flag to clear the track.

On the restart, Raz held off defending champion Daniel Doherty for his first Super Truck win of the year.

In the first of two Super Late Model main events, Ron Searle Jr. had the lead going into lap two. From his eighth-place starting position, Brandon Farrington made it to the front to battle for the lead on lap nine.

Mariah McGriff watched the drag race for the lead in third.

Coming into lap 18, Farrington made his way around Searle. Contact from Searle sent Farrington spinning out of turn two. Both drivers were sent to the back on the restart per track rules.

McGriff held off Paul Banghart on the restart for her first main event win of the season.

Farrington took the early lead away from Sean Bray in the second Super Late Model main event. Brandon Schilling followed him into second.

With five to go, Dane Jorgenson and Banghart battled for third with Jorgenson having the better of it.

Jorgenson took second from Schilling with two to go.

Farrington drove his No. 25 to its sixth victory of the season.

Daniel Doherty took a commanding lead of the Hornet main event. Tim Olds worked his way through traffic for second.

Loose coming out of turn two on the fourth lap, Doherty gave Hall the opening she needed to take the lead.

Hall dominated the remainder of the feature race for her fourth win of the season.

Mike Webber had the early lead in the Legend main event, but lost it to Ricky De Le Ree on lap two. Jordan Holloway took second from Webber on lap five, setting his sights on teammate De Le Ree who had opened up a comfortable lead on the field.

By lap 13, Holloway closed the gap on De Le Ree and took the lead for his first win at Tucson Speedway.

George Murphy took the early lead in the Mini Stock main event, but could not hold off EK Ongley.

Ongley again took the lead from Murphy in the second main event.

Coming to the checkered flag, Murphy made a final charge for the lead making contact with Ongley. Murphy was able to get his car under control for a second place finish.

Ongley drove his No. 10 to back to back wins. Murphy again finished second, Martinez third and Kleifgen fourth.

For a complete list of points and finishes, visit www.tucsonspeedway.com.

Tucson Speedway is back in action Aug. 11 with the NASCAR Modifieds, Pro Stocks, Outlaws and Hobby Stocks. Gates open at 5 p.m. Racing starts at 7 p.m. For tickets and information, visit www.tucsonspeedway.com.