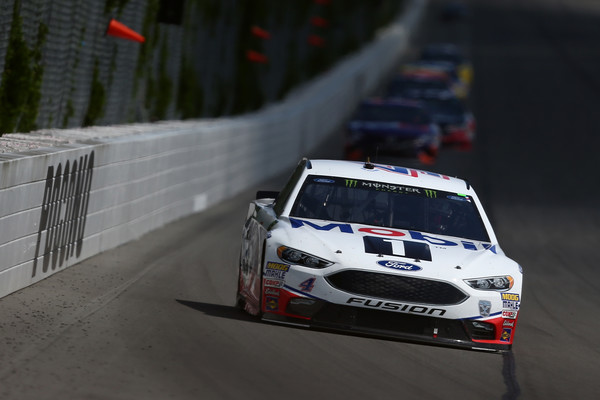 ● Kevin Harvick started 29th after his first-place qualifying time was disallowed in post-qualifying inspection. He finished second in the stage to earn nine bonus points.

● The Mobil 1 driver raced up to the eighth position by lap 20.

● Harvick was the first car to come to pit road on lap 21 under green-flag conditions for four tires and fuel.

● He rejoined the field in 32nd and raced up to the second position by the end of the stage.

● The Mobil 1 Ford surrendered the lead to come to pit road for four tires and fuel under green on lap 77.

● The No. 4 Ford raced back up to the sixth position before a caution on lap 82 and opted to stay out under the caution.

● Harvick restarted as the leader on lap 87 as the top-five came to pit road for service under the caution.

● He was able to maintain the lead for the remainder of the stage.

● The Mobil 1 team pitted at the completion of Stage 2 for four tires, fuel and tape, although several teams had opted to pit prior to Stage 2 ending.

● The Bakersfield, California, native briefly fell back to the 13th spot at the start of the final stage.

● During the lap-122 caution period, Harvick noted a tight-handling condition to start, and the Mobil 1 crew went to work to service Harvick’s Ford with tires, fuel and tape. Unfortunately, upon exiting pit road, Harvick and the No. 10 made contact, forcing crew chief Rodney Childers to call Harvick back to pit road for repairs.

● Luckily, immediately following the lap-122 caution there was another yellow flag displayed, which allowed Harvick to catch the field.

● The Mobil 1 team opted to stay out during the lap-154 red flag and ultimately finished the race fourth.

● Harvick led twice for 30 laps to increase his laps-led total at Pocono to 187.

● Harvick has 10 stage wins and 33 playoff points accumulated thus far in the 2018 season.

● Kyle Busch won the Gander Outdoors 400 in overtime to score his 49th career Monster Energy NASCAR Cup Series victory, his sixth of the season and his second at Pocono. His margin of victory over second-place Daniel Suarez was 1.788 seconds.

● There were seven caution periods for a total of 29 laps.

● Twenty-eight of the 40 drivers in the Gander Outdoors 400 finished on the lead lap.

Kevin Harvick, driver of the No. 4 Mobil 1 Ford Fusion for Stewart-Haas Racing:

“It was eventful. I think we went to the back twice and made our way back to the front each time. We made a good race out of it, but it is hard to swallow on a day like that when our Mobil 1 Ford was the class of the field. You never know what is going to happen on these days. It is hard to put them together, and you win some and lose some.”

The next event on the Monster Energy NASCAR Cup Series schedule is the Go Bowling at The Glen on Sunday, Aug. 5 at Watkins Glen (N.Y.) International. The race starts at 2:30 p.m. EDT with live coverage provided by NBC. Prerace coverage begins at 1 p.m. on NBCSN.