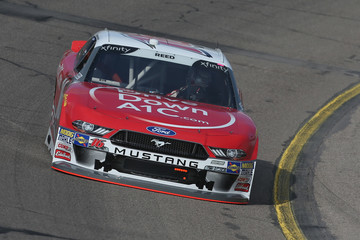 Ryan Reed drove his way to a seventh-place finish Saturday afternoon at Iowa Speedway in his No. 16 Drive Down A1C Lilly Diabetes Ford Mustang.  Reed started 19th, spent a majority of the race as a factor within the top 10 and avoided late race cautions to earn his career-best finish at the 0.875-mile track.

“We had a solid day,” said Reed.  “Our Lilly Ford was fast all day and we were able to capitalize on that and earn some stage points.  We need to keep stringing together top 10 runs like this, we are definitely capable and we proved that today.”

Reed qualified 19th and over the course of stage one worked his way up to 14th despite reporting the handling was a little tight through the center and that he could use more forward drive.  At the stage break Reed came down pit road for four tires, fuel and an air pressure adjustment.  With a fast stop by his Lilly crew, Reed lined up 11th for stage two.

Stage two went caution free and with the long green flag run the handling came around and Reed was turning out lap times as fast as the leaders.  Reed raced his way up to ninth to close out stage two.  The No. 16 proved good on long green flag runs following the previous adjustment, so at the stage break Reed visited pit road for another air pressure adjustment.

With another fast stop Reed gained spots on pit road and lined up seventh for the final stage.  The car lost a little forward drive, causing Reed to lose a few spots over the course of the final run.  Reed was able to capitalize on multiple cautions at the end to work his way forward to cross the finish line seventh.