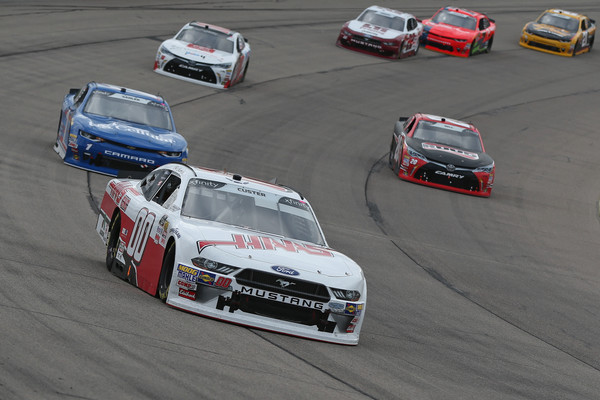 ● After a lap-19 caution, Custer took the lead.

● He held the Haas Automation Ford in the lead until the stage concluded.

● He pitted for four tires, fuel and adjustments at the end of the stage.

● Custer lost the lead in the opening laps, but made the pass to the front of the field on lap 82.

● He held the lead until the closing laps of Stage 2 and just missed his second stage win of the race.

● He pitted at the end of the stage for four fresh tires, fuel and chassis adjustments.

● Custer piloted the Haas Automation Ford in the lead until lap 154.

● After pitting under green on lap 198, Custer made contact with the No. 55 car but steered his car back to second place.

● Custer pitted during a lap-240 caution for four fresh tires and fuel. He fell back to 11th place.

● During a final restart after a red-flag caution, Custer held the Haas Automation Ford inside the top-10.

● Christopher Bell won the U.S. Cellular 250 to score his fifth career Xfinity Series victory, fourth of the season and first at Iowa. His margin of victory over second-place Justin Allgaier was 1.398 of a second.

“Stewart-Haas Racing gave us a car to compete today and I just couldn’t get it done at the end. Thanks to everyone at Ford and Haas Automation for giving us a fast car again. We lead a ton of laps, but didn’t come home with the win.”

The next event on the NASCAR Xfinity Series schedule is the Zippo 200 on Saturday, August 4 at Watkins Glen (N.Y.) International. The race starts at 3 p.m. EDT with live coverage provided by NBC.