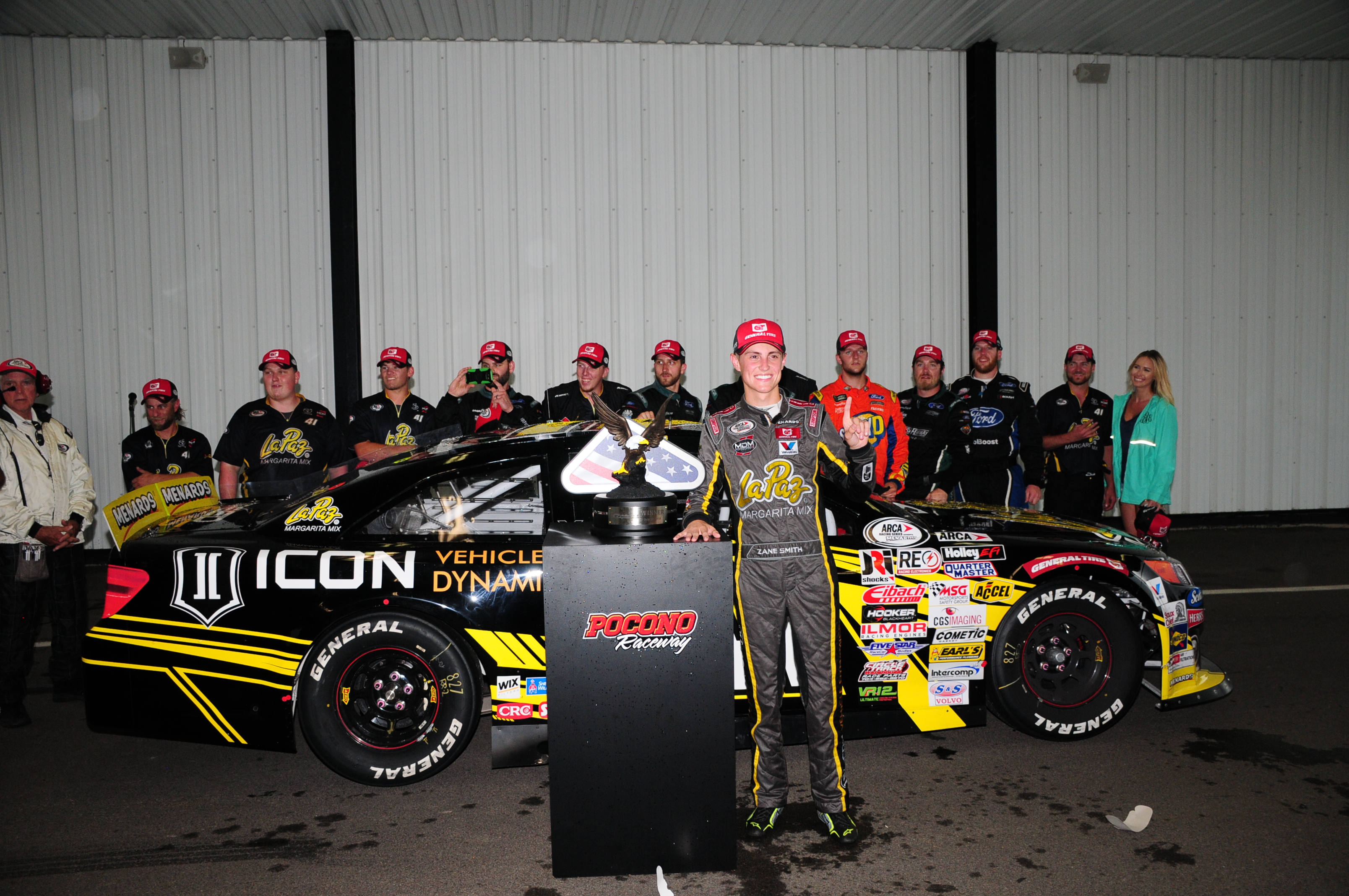 Zane Smith won Friday’s rain-shortened ModSpace 150 for the ARCA Racing Series presented by Menards at Pocono Raceway. Smith led an MDM Motorsports sweep of the top four positions in his No. 41 LaPaz Margarita Mix/ICON Vehicle Dynamics Toyota. It was his fourth ARCA Racing Series win of the season.
Smith took the lead when Todd Gilliland pitted under caution on lap 14, and with the exception of lap 28, when his teammate Sheldon Creed nipped him at the line, he led the rest of the way.
For most of the final 12-lap green flag dash to the checkered, Smith held a half-second to a one-second advantage over Creed’s No. 28 United Rentals Toyota. On lap 28, Smith drifted high in turn three allowing Creed to close the gap. The two raced side-by-side down the frontstretch, with Smith forcing Creed below the white line at pit exit. Neither driver had a solid approach to turn one, and Creed’s car wiggled underneath of Smith and they touched; Smith continued on while Creed slapped the outside wall.
“I totally drove him down the track,” Smith said with a smile. “I knew we were racing to lap 31 and I had just slipped up out of the groove around a lapper and gave up a huge lead. I didn’t want him to get by at all because that would have been the race right there. He did a nice job holding on to it to give MDM a top four sweep.”
Creed locked up the General Tire Superspeedway Challenge championship with his second-place finish. For the current series championship leader, there was no disappointment in coming home second; instead, he was excited at the save he made in turn one.
“I hope they have a good shot of that save,” Creed said. “I absolutely pounded the wall. I thought we were both going to get taken out. If they were right up on us, there’s no way we would have finished 1-2. I saw him slide up the track and I knew it was my only chance. We went down into one and started getting sideways. It was crazy.”
Chase Purdy finished third in the No. 8 Bama Buggies Toyota, Harrison Burton was fourth in the No. 12 Dex Imaging Toyota, and Riley Herbst rounded out the top five in the No. 18 NOS Energy/ORCA Coolers Toyota.
Creed maintains the unofficial series points lead with 3535 points over Smith who is second at 3375, Herbst is third at 3125, Purdy fourth at 3050 and Travis Braden, driver of the No 27 MatrixCare/Consonus Healthcare Ford is fifth at 2995.
There were three cautions for 15 laps during the event, the first for General Tire Pole winner Gus Dean who spun off turn two on lap 9. Dean, the winner of the last series event at Elko, would retire his No. 32 Gree Cooling Products/Baker Distributing Chevrolet due to another incident a few laps later. The second yellow of the day waved on the restart when Joe Graf, Jr. pounded the turn two wall in the No. 77 Big Tine Ford. Graf was evaluated and released from the infield care center. The final yellow waved on lap 31 for rain, which eventually ended the race.
The race, shortened to 33 of 60 laps, took 43 minutes, 58.23 seconds. Smith averaged 112.585 miles per hour. There were four lead changes among three drivers.
Next up for the ARCA Racing Series presented by Menards is the Allen Crowe 100 at the Illinois State Fairgrounds in Springfield, Illinois. The event is the first of two races contested this season on one-mile dirt tracks. The event will kick off with practice at 9 am CT, followed by General Tire Pole Qualifying at 11 am CT. The green flag will fly on round 15 of the 2018 ARCA season at 1:30 pm CT. The race will be shown live on MAVTV while ARCARacing.com will have live timing, scoring, track updates, and scanner audio for registered users during all on-track sessions.
ARCA PR/Photo Credit ARCA