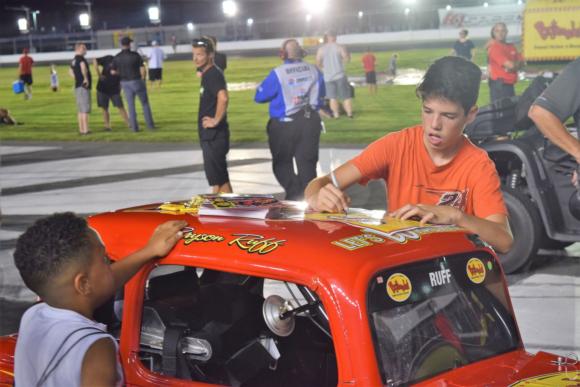 Having competed in the Bojangles’ Summer Shootout for more than four years, Bryson Ruff knows how challenging racing at Charlotte Motor Speedway can be.

The 13-year-old native of Indian Trail, North Carolina, has plenty of experience on Charlotte’s frontstretch quarter-mile oval. Since 2014, Ruff has registered 10 victories at Charlotte across Legend Car and Bandolero competition. Winning at America’s Home for Racing, Ruff said, carries a special meaning.

“Everybody comes down (to the Bojangles’ Summer Shootout) from other places around the country,” Ruff said. “They’re all good drivers so it’s competitive.”

The strategy Ruff employs on most race nights will stay the same next week. While youth is certainly on Ruff’s side – seven Monster Energy NASCAR Cup Series veterans debuted in the series before Ruff was born – he’s full of knowledge as well.

“You’ve just got to avoid any wrecks and stay up front,” Ruff said. “If you’re not in the front when you start, it takes a while to get there.”

Area clergy will lock horns in a school bus slobberknocker like no other during the annual Faster Pastor race presented by Farm Bureau on Tuesday. The final night of racing will also include a free autograph session with drivers on the track and a fireworks spectacular presented by NGK Spark Plugs.

Gates open at 5 p.m. each night, followed by heat races at 5:30 p.m. Opening ceremonies are scheduled for 6:45 p.m. followed by feature races. The autograph session, followed by fireworks, will start at approximately 9:15 p.m.

TICKETS: Tickets, which cost only $8 for adults and are FREE for kids 13 and under, can be purchased at the gate or in advance by calling 800-455-FANS or online at www.charlottemotorspeedway.com/tickets.