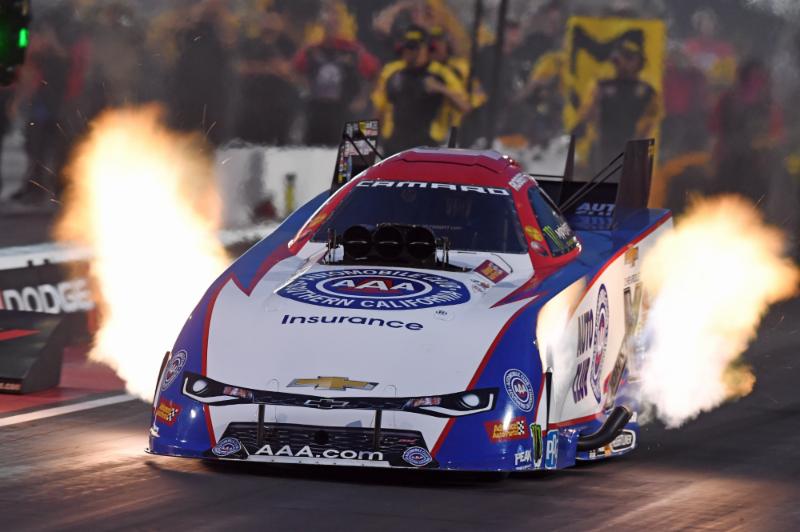 Sonoma Raceway is a special place for two time and reigning Funny Car world champion Robert Hight. The fan turned crew guy turned professional racer knows the track well having attended the event through the years.
“I still consider Sonoma my home track because it is the closest racetrack to where I grew up. I have been to every single NHRA national event they have had there. I have seen races there as a fan, a crewman and a driver,” explained Hight.
Hight won the event in 2008 but among his win, one of the most memorable moments at the Toyota NHRA Sonoma Nationals came in 2017 when he set the national speed record at 339.87 mph during qualifying.
“Setting the speed record there last year was pretty special but I have only won that race one time and I want to get another win there,” added Hight.
Hight pegs this time of the season last year as when he and his Auto Club of Southern California team hit their stride heading into the Countdown to the Championship and the title chase. After a solid showing last week in Denver at the Mile-High NHRA Nationals with a No. 3 qualifying effort and semifinal finish, Hight is feeling the same confidence he did in 2017.
“We had a good race car in Denver. We went down the track just about every run and we made a lot of three second runs on the mountain. (Crew chief) Jimmy (Prock) was very happy leaving Denver with the way this Auto Club Chevrolet ran. He told me he thought we could run this strong at sea level,” Hight said. “This is the time of year where we are focusing on getting everything worked out so that in a few races from now, when it really counts for the championship, we are where we need to be.”
After the Western Swing there are only two events before the NHRA’s Countdown to the Championship begins so the three-race stretch is vital to preparing for the a championship hunt.
“This is my favorite time of the season. We are using the Western Swing to get ready for another championship run. If everything comes together we will pick up some wins along the way,” continued Hight. “I am excited for this weekend in Sonoma. I feel just as good this year as I did last year without a doubt. This is the time when you really start looking towards the Countdown and these races will set us up for success.”
Heading into race two of the three-race Western Swing, Hight is fourth in points with a win at the Chicago race and three runner-up finishes that include the Winternationals in Pomona, Calif., the SpringNationals in Houston where he was also the No. 1 qualifier and the Heartland Nationals in Topeka, Kan. where he lost to teammate and current points leader Courtney Force in the final.
Qualifying at the 31st annual Toyota NHRA Sonoma Nationals begins with two sessions on Friday at 5 and 8 p.m. with two additional sessions on Saturday at 2 and 5 p.m. Eliminations are set to begin Sunday at 11 a.m.
JFR PR