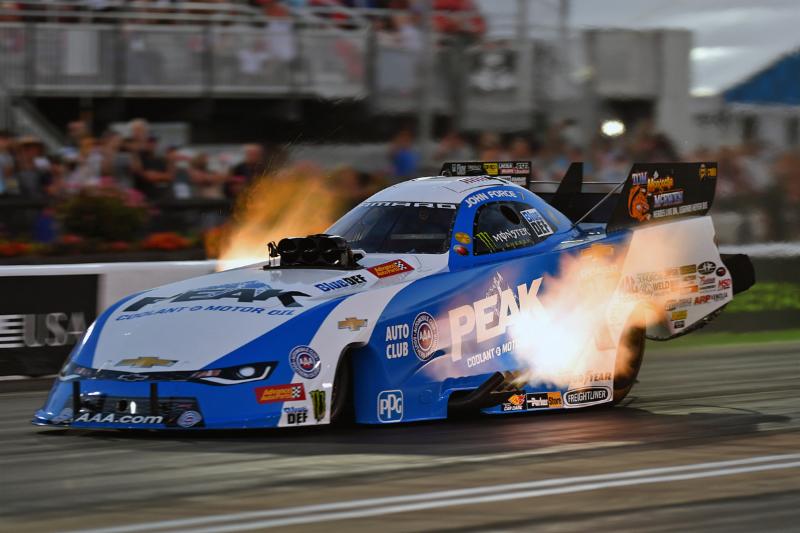 Sixteen-time world champion John Force never lost faith in his PEAK Coolant and Motor Oil Chevrolet Camaro SS Funny Car team and that faith paid off at the Dodge Mile-High NHRA Nationals outside of Denver, Colo. Force racked up his 149th Funny Car victory after eight solid passes down the race track that qualified him fifth and had him defeating former world champions, the points leader and longtime rivals before hoisting the Wally.
“I had to beat a lot of great racers. I love them all. The fire was in me,” Force said. “I am fighting and I got tired of hearing me snivel to myself. My wife doesn’t even want to talk to me. I am working through rehab from my crashes to get out here to win races. I don’t know why I won that race but I have a lot more fight in my belly.”
Force will be taking that fight and fire with him to the Toyota NHRA Sonoma Nationals at Sonoma Raceway, the second of three races on the famed Western Swing. Sonoma Raceway has been good to Force through his career. The winningest driver in NHRA history has eight victories in 14 final round appearances at the track, his most recent win coming in 2016, as well as eight No. 1 qualifiers.
“I love Sonoma, I love this time of year. The family gets together in Tahoe all around the Western Swing. Sonoma is almost like a second home track for us being from Southern California. I’ve had a lot of success there and I’m hoping that momentum from Denver will keep us moving forward,” Force said. “We found the consistency on The Mountain. (Crew chiefs) Jon Schaffer and Ronnie Thompson and this whole PEAK team have been working really hard, it’s paying off. They’ve given me a race car and all I have to do is my job. I told them get me to the starting line and I will give it my best.”
Force’s best has been beyond legendary as the winningest driver chases history looking for his 150th win at his 750th race. To put his accomplishments into perspective Force has faced forty different drivers just in final rounds including international drivers (Jonnie Lindberg and Kenji Okazaki), father and son duos (Jim and Chad Head) and a trio of brothers (Frank, Cruz and Tony Pedregon) and two of his own daughters (Ashley Force Hood and Courtney Force). Through all the races and faces Force continues to motivate himself to get better and continue winning for his sponsors, his fans and his heroes.
“I am still out here chasing Don Prudhomme and Tom McEwen,” said Force. “Those are the legends of the sport and my heroes. I know I will never catch them but I want to keep racing and keep winning. I owe it to my sponsors and all the fans that have stuck with me through all the years and especially this one.”
By his own admission, Force has suffered almost a million dollars in damage to his personal race team from explosions and collisions with guard walls this season. Through it all Force continued to motivate himself and his team to press forward. They have been rewarded in recent weeks with a break through runner-up finish in Richmond and then the dramatic win, his eighth at Bandimere Speedway, last weekend.
Force will be trying to do what only he has done in the Funny Car category, win two more races on the Swing.
“Winning the Swing in 1996 was great because that was a magical season. We won a lot of races and I was Driver of the Year. Getting the swing this year might be bigger than that because we are having to really fight for every round win. My team has given me a good race car and now I just have to drive it like I know I can,” summed up Force.
Qualifying at the 31st annual Toyota NHRA Sonoma Nationals begins with two session on Friday at 5 and 8 p.m. with two additional sessions on Saturday at 2 and 5 p.m. Eliminations are set to begin Sunday at 11 a.m.
JFR PR/Photo Credit: Auto Imagery