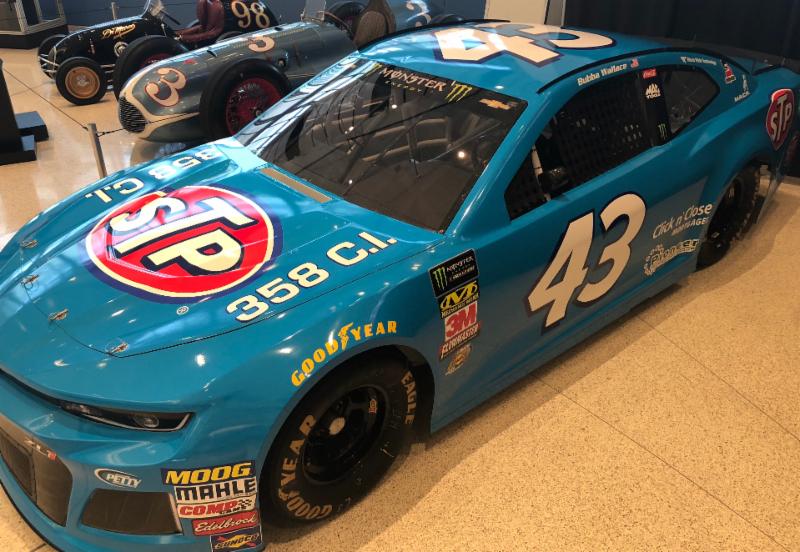 Richard Petty Motorsports and STP today unveiled a historic look for NASCAR’s throwback weekend. The scheme will take fans back to the beginning of one of NASCAR’s longest partnerships. Darrell “Bubba” Wallace Jr. will race the first-ever STP scheme during the Southern 500 at Darlington Raceway on Labor Day weekend. The car was unveiled at the NASCAR Hall of Fame.

Since the time Hall of Fame driver and crew chief, “The King” Richard Petty and Dale Inman, created the famous Petty Blue color, the No. 43 machine raced primarily in that shade of blue throughout the 1960’s. In the beginning of 1972, STP became Petty’s first major sponsor, and thus serious discussions about the new look of the famed “43” began. Petty was insistent of the Petty Blue while STP boss Andy Granatelli insisted on the Day-Glo STP red.

The car showed up to Riverside International Raceway with the traditional, famous Petty Blue scheme, but for the first time, with the red STP logos placed on the car. Naturally, Granatelli wanted a lot more. He even offered Petty $50,000 to have the Day-Glo colors on the racer, but Petty held firm that first race of the season in California. However, the discussion didn’t end after Riverside, and over two days of “playing with crayons”, as Sports Illustrated described it, Petty and Granatelli agreed on the now famous Petty Blue and Day-Glo STP red that debuted in the ’72 Daytona 500 and still races today.

Celebrating the Petty and STP agreement, the original Riverside scheme will now again return to the track with Wallace Jr. behind the wheel at Darlington.

“When you race for Richard Petty, you learn so much about NASCAR’s history,” said Wallace Jr. “Richard was there at the start of sponsorship, and it was with STP. He and STP defined what a true partnership is in the sport. The same values and principles of that first agreement, they still hold true today over 45 years later. It’s an honor to go back in time to when STP came into the sport and race the very first paint scheme with STP on the ’43’. It’s a cool look and I can’t wait to see it on the track.”

“STP and Richard Petty are synonymous in NASCAR,” said Katina Wall, Marketing Director for STP. “We want to celebrate the beginning of this historic partnership with the first scheme that Richard raced with STP on the car. There is no better driver than Bubba Wallace to carry on that tradition. He’s groundbreaking and proven to be a trendsetter and leader, just like STP.”

Wallace Jr. hopes he can repeat the performance that Petty turned in that day at Riverside. The Petty Enterprises team qualified second and won the race. It was the first of 60 victories with STP and four NASCAR premier series championships with the partnership. Petty remembers the first meeting with famous pitchman Granatelli that led to the sponsorship.

“Andy was the first public relations and marketing person in motorsports,” commented Petty. “He knew exactly how to promote and sell STP products. He was first visible in open wheel racing before coming over to stock cars. We met with him and that relationship with STP still remains today. We’re happy to have Bubba carry on the tradition and help bring back memories at Darlington later this year.”

The Southern 500 at the Darlington Raceway is scheduled for Sunday, September 2. The race will be televised live on NBC Sports Network at 6:00 p.m. ET and broadcast on the Motor Racing Network and SIRIUS/XM NASCAR radio.