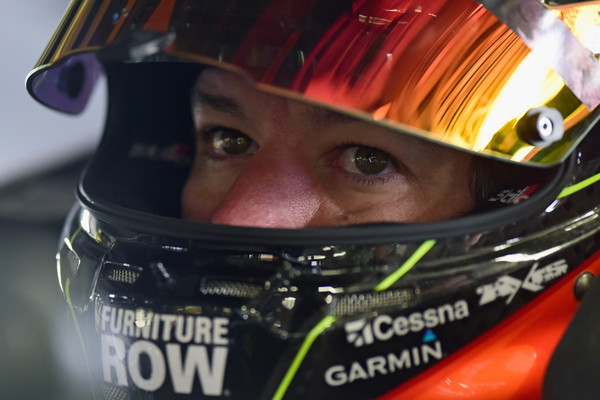 After a strong start in Sunday’s NASCAR Cup Series race at New Hampshire Motor Speedway, Martin Truex Jr. found himself fighting back at the end to post a fourth-place finish.
Though he didn’t win the 301-lap race, which was delayed three hours due to wet weather, it was a good points day for the Furniture Row Racing driver. He won the first stage to pick up one playoff bonus point and ten standing points.
But after leading 83 consecutive laps (laps 49-131) at the 1-mile track, Truex’s No. 78 5-hour ENERGY/Bass Pro Shops Toyota started to experience some handling issues which resulted in a third-place finish in the second 75-lap stage.
Due to his stage finishes and fourth-place overall posting, Truex collected 51 driver points, the same amount that race winner Kevin Harvick accumulated. Truex’s 83 laps led was the second most for the race.
His finish was also his 14th top five result after 20 races. He remains third in both the driver and playoff points.
Though there were positives that came out of the race, it was still bittersweet for the Mayetta, N.J. native. He was out to claim his first career victory at the New England venue that he considers his first home track due to the time he spent there during his adolescent years as a racer and also watching his father compete in the former North Busch Series.
“We tried hard, but we just can’t quite figure out the second half of this thing (New Hampshire race), but when we do we’re going to be in good shape,” Truex noted. “We were fast early. But the VHT (track compound to increase traction) wore off and I was no good anymore.
“We also had a set of tires which was funny during that one run and the car was wheel hopping really bad. I couldn’t hang onto to it, so we lost some spots. But our pit crew kept us in the game. We had a good stop there at the end that gave us a shot. We just didn’t have the speed.”
Following Harvick to the checkered flag were: Kyle Busch, Aric Almirola, Truex, Chase Elliott, Ryan Newman, Ryan Blaney, Kurt Busch, Joey Logano and Jimmie Johnson.
The race had 10 lead changes among seven drivers and there seven cautions for 31 laps.
The next stop for the NASCAR Cup Series is Sunday July 29 at Pocono Raceway where Truex won in the June race at the Pennsylvania track.
FRR PR/Photo Credit Jared C. Tilton/Getty Images
Post Views: 203