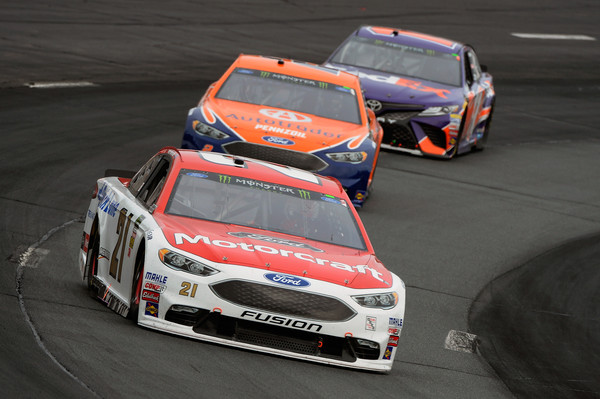 Paul Menard and the No. 21 Motorcraft/Quick Lane team had a fast Ford Fusion in the early stages of Sunday’s Foxwoods Resort Casino 301 at New Hampshire Motor Speedway.

The speed fell off midrace, but the team adjusted on the car, regained their form from earlier in the race and were fast, even on worn tires, in the closing laps.

The net result was a 17th place finish which allowed Menard and the Motorcraft/Quick Lane team to remain in the hunt for one of the 16 berths for the 10-race, season-ending Monster Energy Cup Series playoffs, which begin after six more regular season races.

Menard started Sunday’s rain-delayed race from 12th position. He dropped back to 22nd place at one point but rebounded to finish the first Stage in 13th.

He restarted Stage Two from the 10th position thanks to quick work on pit road by the Motorcraft/Quick Lane crew.

But midway through the second stage, the No. 21 Fusion lost speed and Menard ended that segment in 17th place.

In the third and final stage of the 301-lap race, Menard dropped off the lead lap, but when the caution flag flew with 45 laps remaining, crew chief Greg Erwin and the Motorcraft/Quick Lane crew elected to take the wave-around, which put them back on the lead lap but on older tires than most of their competitors.

From that point on, the team was poised to take advantage of another caution and get fresh rubber and possibly another chassis adjustment, but that yellow flag never flew.

“We had a good car, we just got off on our adjustments in the middle part of the race and lost a lot of positions on the track,” Eddie Wood said. “We went a little too far on our adjustments then had to back up some to get to where we were running competitive speeds again.

“Paul did a good job on wave-around tires at the end. We weren’t in a spot where we were likely to lose a lap, but with no more caution flags at the end, we were kind of stuck with what we had.”

Menard and the Cup series return to the track next weekend for the Gander Outdoors 400 at Pocono Raceway.