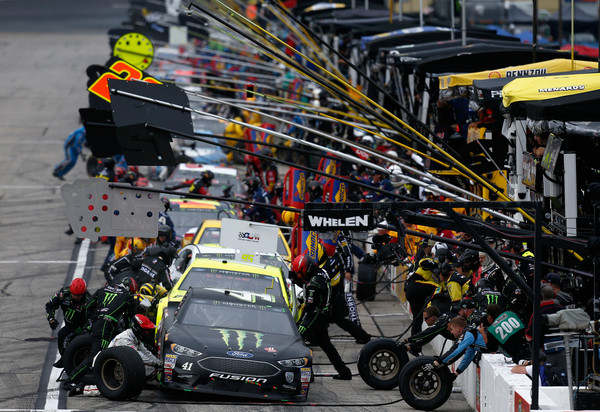 ● The Monster Energy/Haas Automation driver indicated the car was a tick tight.

● Busch was leading when the competition caution came out on lap 35. He pitted on lap 37, taking four tires, fuel and a wedge adjustment. Some cars took two tires and some cars stayed out, so Busch restarted 18th.

● Said car was a bit tight when he got behind other cars, but he worked his way up to fourth to end the stage.

● Busch pitted on lap 78 for four tires and fuel.

● The No. 41 Monster Energy/Haas Automation Ford Fusion was a bit tight, but the lap times were strong.

● Busch pitted on lap 154 for four tires and fuel.

● On lap 227, Busch pitted for four tires and fuel. While on pit lane and trying to enter his pit stall, the car of Ryan Blaney was just finishing his stop in the next pit stall. Busch opted to wait, but so did Blaney, costing them both a few seconds.

● Busch pitted on lap 258 for four tires and fuel. He restarted fifth.

● On the restart, Busch fell back to 12th place. He was able to work his way back up to eighth, where he finished.

● Busch led twice for a race-high 94 laps to increase his laps-led total at New Hampshire to 635.

● There were seven caution periods for a total of 31 laps.

● Only 19 of the 37 drivers in the Foxwoods Resort Casino 301 finished on the lead lap.

“The good news is we had good speed. We had good lap times most of the day. For 95 percent of the day we had pace to be a winner and to lead laps, so that’s what I take away from a day like today, where sometimes we’d be glued sixth to 10th and don’t have the power to lead laps a lot, so I’m happy with that. Pit road, once in a thousand years that’s gonna happen. We just shouldn’t have pitted on that lap. (Ryan) Blaney is a good kid. He wanted to let me go, but then I would have blocked him in. I was like, ‘No kid, go.’ That just turned into a total disaster, and then I just didn’t get a good restart behind Almirola when we were fifth; so, you mess up twice, you’re not gonna win the race. That’s just how it works in the Monster Energy Cup. Thanks to Monster Energy, Haas Automation and Ford.”

The next event on the Monster Energy NASCAR Cup Series schedule is the Gander Outdoors 400 on Sunday, July 29 at Pocono (Pa.) Raceway. The race starts at 2:30 p.m. EDT with live coverage provided by NBCSN beginning at 2 p.m.