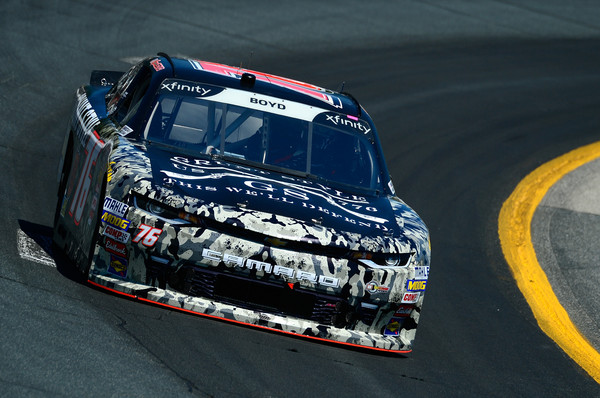 The NASCAR Xfinity Series made a stop up North for their eighteenth race of the season in New Hampshire this weekend. New Hampshire Motor Speedway, also know as ‘The Magic Mile’ has become a fan favorite over the years, due to its short track style of racing.

SS Greenlight Racing debuted a new car for Spencer Boyd this weekend, which meant expectations were high, yet unknown going into the weekend. Friday’s two practice sessions went smooth and the car seemed to show good speed. Boyd was a little too free in qualifying and would roll off from the 29th starting position.

The race began and Boyd began making his way forward. Boyd managed to work his way up to the 26th position before the car started falling off over the course of the run. The first stage went caution free, as Christopher Bell picked up the stage win with Boyd in 28th. Boyd radioed to his crew that the front of the car felt “numb” and the car was the worst it had been all weekend on entry. Miller called for four tires, fuel, and adjustments to tighten up the entry for Boyd. Spencer manually dialed in more front braking, which would also help his entry to the corner.

A string of cautions plagued stage two. The first caution of stage two was for debris on lap 70. Then on lap 79 Ross Chastain backed his No. 4 car up against the wall. Boyd was racing hard to be the first car a lap down, in order to receive the lucky dog. On lap 85 caution was again displayed after the 16 of Ryan Reed made contact with the 11 of Ryan Truex, which gave Boyd the lucky dog. Brad Keselowski won the second stage and Boyd managed to work his way up to the 24th position.

During stage three Boyd quietly continued progressing his way forward up to the 22nd position. Much like the first stage, the Grunt Style Chevrolet began falling off pace during the long green flag run. Boyd drifted back to the 25th position as green flag pit stops began taking place. On lap 169 the 51 of Jeremy Clements came off the track a little too hot and slammed into the sand barriers at the entrance of pit road. This brought out the caution just before Boyd was scheduled to pit. After a brief red flag for clean up racing was resumed. The final caution was displayed on lap 178 as the 0 of Garrett Smithley and 40 of Chad Finchum tangled. When all was said and done Christopher Bell scored the win and Boyd brought home the Grunt Style Chevrolet in the 24th position. The result marked top 25 finishes in five out of Boyd’s last six races.

After the race Boyd reflected, “It was another solid day for us. We just didn’t quite have the speed on those long runs, but we were lightning fast on the short runs. I can’t thank Bobby Dotter, Jason Miller, and all my guys at SS Greenlight Racing enough for working so hard to prepare this new Grunt Style racecar for me. The consistency we’ve been able to show week in and week out is really encouraging to me. We just need to make a few tweaks and I think we’ll be really close to knocking out some top 20 finishes in these next couple weeks.”

After another solid top 25 finish in New Hampshire, Boyd remains 22nd in driver standings. The Xfinity Series returns to Iowa Speedway next weekend for it’s second visit of the season. Coverage of the U.S. Cellular 250 presented by the Rasmussen Group will begin Saturday July 28th at 5:00 pm ET.