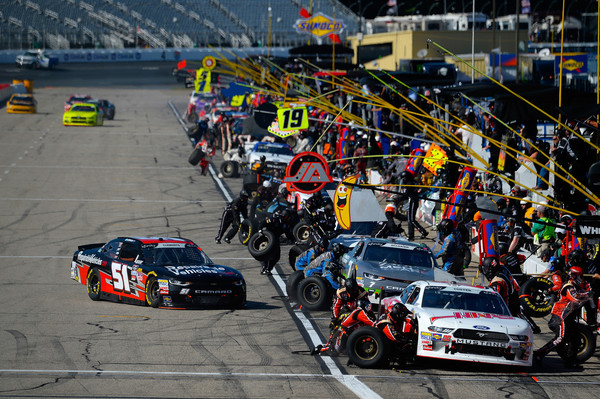 ● Due to a penalty from the pole sitter, Custer started the race in the third position.

● He noted loose-handling conditions that caused him to fall to seventh place after seven laps.

● Custer pitted for four tires, fuel and adjustments at the end of the stage.

● Custer noted that his previous loose-handling conditions were shifting to become tighter.

● He restarted 13th and piloted his car in that position until the end of the stage.

● Custer ran as high as second place in the final stage.

● Due to handling issues, Custer fell outside the top-five.

● He pitted under green-flag conditions on lap 163 for four tires and fuel.

● After a final caution on lap 178, he restarted in eighth place and ran inside the top-10 before the checkered flag waved.

● This marks Custer’s 14th top-10 of the season and second at New Hampshire.

● Christopher Bell won the Lakes Region 200 to score his third career Xfinity Series victory, third of the season and first at New Hampshire. His margin of victory over second-place Brad Keselowski was .416 of a second.

“We fought it all day. We weren’t the best on the short run or the long run, so it was a struggle. We did whatever we could to keep track position and we did a good job there. We’ll try and make it better, but this is definitely not our strong suit.”

The next event on the NASCAR Xfinity Series schedule is the U.S. Cellular 250 on Saturday, July 28 at Iowa Speedway in Newton. The race starts at 5 p.m. EDT with live coverage provided by NBCSN.