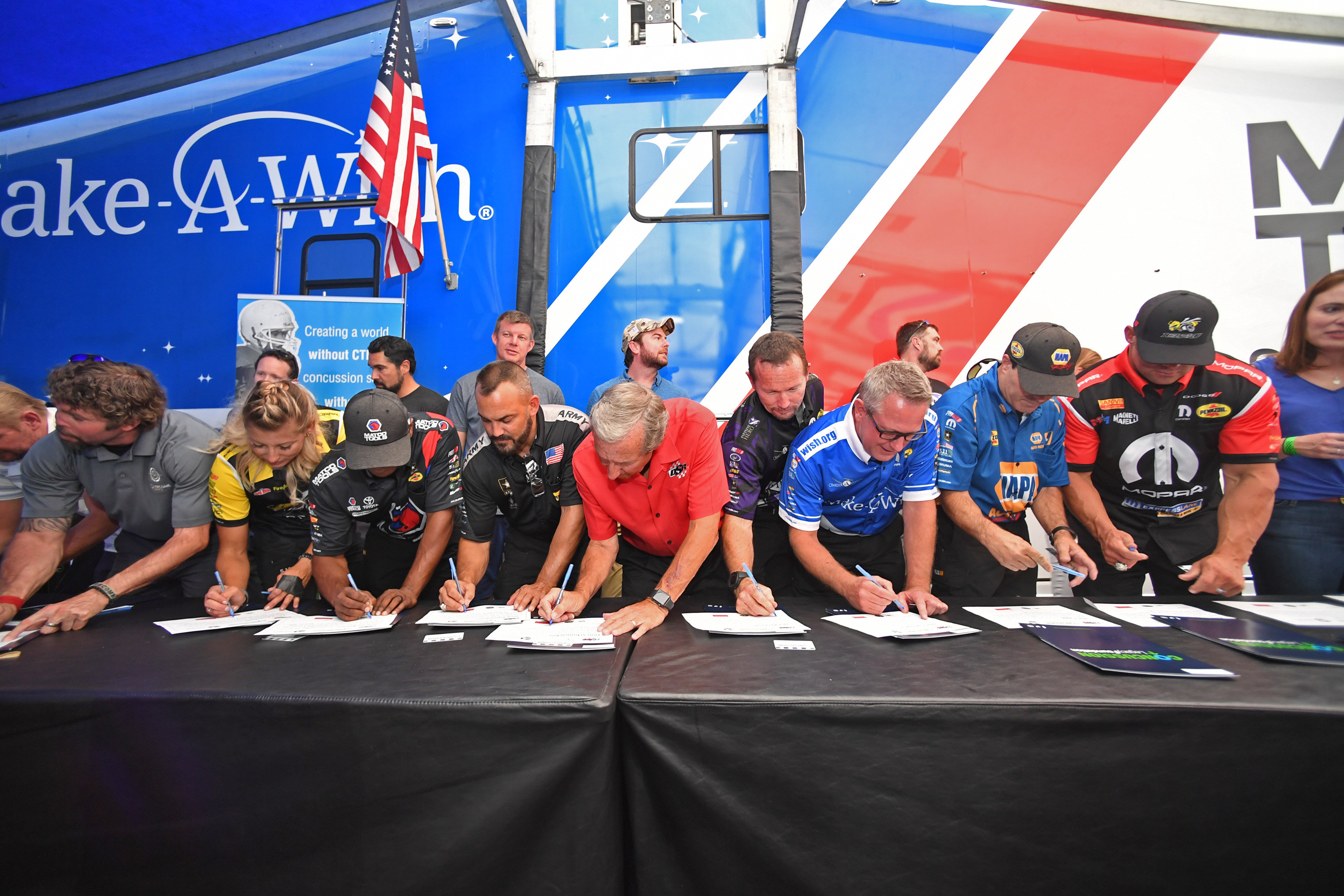 Don Schumacher Racing made history today when all seven drivers of the winningest NHRA Drag Racing team, along with team patriarch and racing legend, Don Schumacher, pledged to donate their brains to the Concussion Legacy Foundation (CLF).

At 4:30 p.m. MST, Schumacher and his roster of drivers signed the paperwork, making their commitment official. 3,500 former and current athletes and veterans have pledged to donate their brains for research since 2008, but DSR’s public declaration at Bandimere Speedway during the Dodge Mile-High NHRA Nationals marked the first time an entire team has made the commitment.

Schumacher and his cadre of drivers, who experience intense vibrations, extreme g-forces and high-speed explosions behind the wheel of their 330-mile-per-hour, 11,000-horsepower nitromethane-burning race cars, will immediately begin a comprehensive brain monitoring process to ensure an in-depth brain profile upon donation.

Through Project Enlist, CLF and IHF are conducting recruiting and outreach to the military and veteran communities to encourage participation in the U.S. Department of Veteran Affairs-Boston University-Concussion Legacy Foundation (VA-BU-CLF) Brain Bank brain donation registry. The VA-BU-CLF Brain Bank is the world’s largest CTE brain bank with subspecialties in concussion, ALS, Parkinson’s and Alzheimer’s disease.

When Schumacher heard about the program, he felt compelled to get involved and help raise awareness for Project Enlist.

“Donating my brain for research to help other individuals in this world is something that I’m more than willing to do. It surprised my wife, Sarah, but she also agreed to me doing this based on its potential to help drivers, soldiers, business people and the population of the world,” said Don Schumacher, who is highly regarded as a pioneer for innovative performance and safety procedures throughout the racing industry.

After hearing of his pledge, each of Schumacher’s seven drivers – Jack Beckman, Antron Brown, Ron Capps, Matt Hagan, Tommy Johnson Jr., Leah Pritchett and Tony Schumacher – followed suit, making the promise to donate their brains for the advancement of research on the effects of brain trauma in athletes and military veterans.

“I support this foundation 100% and was thrilled that my seven drivers agreed to donate their brains to the Concussion Legacy Foundation,” added Schumacher, who was recently named to the Motorsports Hall of Fame of America’s Class of 2019.

Schumacher hopes that his team’s public proclamation will help to remove the stigma associated with traumatic brain injuries and inspire others to step forward and make the commitment to pledge their brains to science.

Schumacher and the DSR drivers inked their commitments alongside more than a dozen military veterans, which included retired NAVY SEALS Jason Redman, Alexander Oliver, and Morgan Luttrell, who currently serves as Senior Advisor for Veterans Relations at the U.S. Department of Energy. IHF spokesperson and NHRA mainstay Gary Linfoot, former Marine Michael Wilson and more than 20 heads of veteran service organizations which have received funding by IHF also participated in the commemorative event.

Quotable:
Jack Beckman, driver of the Infinite Hero Foundation Dodge Charger R/T
“My wife didn’t take the news that I was pledging my brain quite the way I thought. Apparently, she wants to have me stuffed and put in the corner of our living room (jokes), but I’ve been an organ donor since I was 16. My thought is, if it can help somebody else, that’s fantastic. When you see these veterans coming back with traumatic brain injuries and PTS, and there’s no one cure for this, it makes you realize how much more we still need to learn about the human brain to have effective treatments for the majority of the injured vets. To be a part of that in some small way; well, I can’t take my brain with me, haven’t used it since I started driving a Funny Car (laughs), so someone else might as well take advantage.”

Antron Brown, driver of the Matco Tools/U.S. Army Top Fuel dragster
“We always want to do whatever we can to help elevate the safety in our sport, and be proactive in bettering the safety for all.”

Ron Capps, driver of the NAPA AUTO PARTS Dodge Charger R/T
“When approached with the chance to help the Concussion Legacy Foundation and have an opportunity to help with advancing the study, treatment, and prevention of the effects of brain trauma in athletes as well as other at-risk groups, we said ‘yes’ without hesitation. The Concussion Legacy Foundation is a group of dedicated people doing great things to help the next generations to come, and we’re proud to help in any way we can.”

Matt Hagan, driver of the Mopar Express Lane Dodge Charger SRT Hellcat
“I think it’s pretty cool to donate anything to science. My brain is kind of mush anyways (jokes). Anytime we can do something to help is a good thing and being able to have research off of how your brain is affected by g-force and things like that, is interesting. Driving a nitro Funny Car is not something just anybody gets to do. There are only maybe 50 people in the world that really, truly experience the g-forces we do on a regular basis. These cars are extreme, we put on a show, and we put our bodies through elements that most people will never even understand. If we can help with the research of concussions and saving lives, that’s a great thing, and I’m all about it.”

Tommy Johnson Jr., driver of the Make-A-Wish Foundation Dodge Charger R/T
“I elected to donate my brain because of all of my years of racing, suffering explosions, and experiencing tire shake. If the Concussion Legacy Foundation can learn something that would help the next generation, I would be very proud to be a part of that. Tying it in with the soldiers who experience traumatic brain injuries, if we can work together and help one another, I think it’s a great opportunity for the road to recovery for everyone.”

Leah Pritchett, driver of the Mopar Dodge Top Fuel dragster
“When I was first asked if I would be open to donating my brain for future research, there wasn’t even a question in my mind at all. All of us are safer in our passenger cars and safer in our race cars because of what we’ve been able to learn from the past. We get to do what we do and are safe because of technology and science. If I have a legacy to leave behind, and it can benefit anybody in any way, from the sports community to the military to a child that wants to play football, whatever it may be, once I’m gone, I won’t need my brain so I’m proud to know that it will benefit others.”

Tony Schumacher, driver of the U.S. Army Top Fuel dragster
“I think any athlete donating their brain is a great idea once you’re done with it here on earth. If people can come up with a better system, and a better way to keep future drivers safer, that’s what we’re supposed to do. We’re supposed to improve our world. The doctors and the technology with all athletes right now, they’re diving in deep to come up with concussion research, and as a driver that goes through 11,000-horsepower, 2.5-Richter scale shaking every single run, I think we’re good candidates to research.”