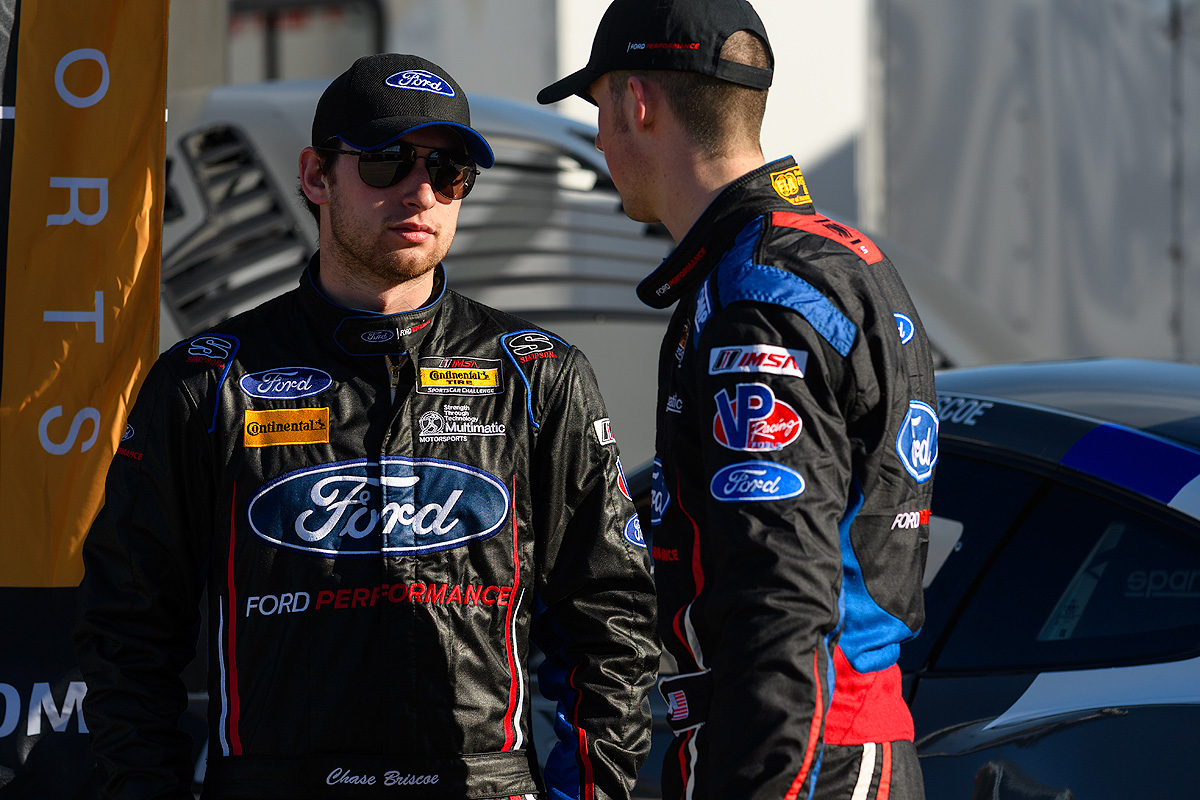 There’s no truth to the rumor Ford Performance Development Driver Chase Briscoe brought some Eldora Speedway dirt to run on the front of his Multimatic Ford Mustang GT4 for luck this weekend as he makes his first run at Lime Rock Park in Saturday’s Lime Rock 120 for the IMSA Continental Tire Sportscar Challenge.

“I wish,” Briscoe said with a laugh after his first practice Friday morning.  “I’m not sure these Mustangs would be that good on dirt, but I’d sure like to try it sometime.  Let’s leave the dirt for the Ford Raptor.”

For Briscoe, it’s been quite the week.  He won a winged sprint car race last Saturday night at Tri-State Speedway in Haubstadt, IN, followed that up with a thrilling photo finish in the NASCAR Camping World race on the dirt at Eldora Speedway on Wednesday night, and now is behind the wheel of a Mustang GT4 on the twists and turns of a tight Lime Rock road course for the first time.

“It’s been a crazy week, but it’s so cool to be able to do it.  I think I’ve raced five different race cars in the last month, so if you’re not running for a championship, this is the next best thing you can do.  It’s just so good to race, but also to race in very competitive vehicles.  That’s what’s it’s all about.”

And it’s exactly the kind of schedule Ford Performance envisioned for its development driver, switching from car to car, series and series, to improve Briscoe’s skills as an overall driver.

“Being able to race a NASCAR race at Eldora and then an IMSA race at Lime Rock is exactly the kind of schedule we want Chase to run as part of his development program,” said Mark Rushbrook, global director, Ford Performance Motorsports.  “We are looking to get Chase as much seat time in as many different vehicles as we can to help him develop as a driver.

“He set quickest time of the race in his last IMSA race in a Mustang GT4, and now wins the NASCAR Eldora Dirt Derby against some great competition.   The great thing about him is he wants to learn.  He is embracing all these opportunities and wants to make the most of all of them.”

“The more things you can drive, the better it makes you because it forces you to adapt to so many things,” Briscoe said.  “From different race cars to different race tracks, you have to learn to adapt.  And I don’t think it gets any different than going from Eldora to Lime Rock.  I am super grateful and super blessed for the opportunity Ford Performance has given me.

“The sprint car stuff and the truck stuff this week was not that different because it was all on dirt.  And surprisingly, I think the sports car stuff seems to play in the hands of the dirt guys.  You see Cup guys who ran dirt like Tony Stewart and Clint Bowyer and they’re good road racers too.  They’re used to sliding back and forth, and sometimes these road courses don’t have much grip and you’re constantly trying to keep the wheels under it and at the same time get some speed out of it.

“It’s fun now that I have kind of figured that out.  It took me three or four IMSA races to get there.  I think Mid-Ohio was where I finally felt like I was competitive enough to battle for a win on a road course.   Now I feel like I can go to the NASCAR XFINITY Mustang there (in Augist) and run top five, and that’s what this program was all about… to get me ready for XFINITY racing in the future.”