ROBERT HIGHT READY TO STAR IN KING OF THE MOUNTAIN ROLE 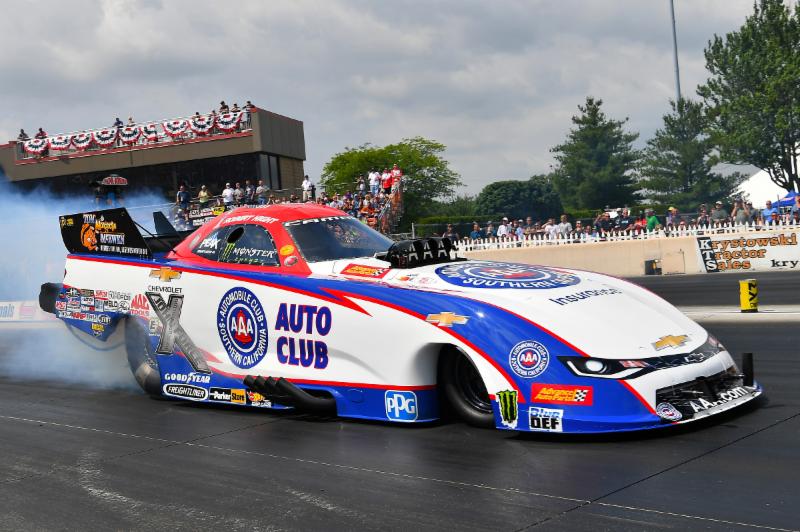 Bandimere Speedway forms the backdrop for a new episode of the action-adventure series “King of the Mountain” airing live this Sunday on FOX and starring two-time and reigning NHRA Funny Car champion Robert Hight.
Set on a racetrack perched 5,860 feet above sea level, cut literally into the side of a mountain, the series documents Hight’s bid to repeat as champion at the 39th Dodge Mile-High NHRA Nationals, the kickoff to the grueling Western Swing, a stretch of three races-in-three weeks that traditionally separates the contenders from the pretenders in professional drag racing.
A former competitive marksman, Hight has been “King of the Mountain” four times in the last 13 years, more often than any other driver in the class including teammate and mentor John Force, whose seven overall wins are the most ever on a track considered the most challenging in the NHRA’s 24-event Mello Yello Series.
Hight’s stellar supporting cast includes Jimmy Prock, Chris Cunningham and the 10,000 horsepower Auto Club of Southern California Chevy Camaro in which last year he became the quickest and fastest ever to negotiate the NHRA’s 1,000-foot race course (3.793 seconds and 339.87 miles per hour).
Although he has won 42 events in his 13 years on the NHRA’s biggest stage, in no other event has the President of John Force Racing, Inc., won more often than the Mile-High Nationals. He first won as a rookie in 2005, a victory that helped him earn Rookie of the Year honors as winner of the Auto Club’s Road to the Future award.
He added wins in 2010 and 2014 before using a .046 reaction time, a 3.995 track time and a finish line speed of 317.57 mph to turn back Tommy Johnson Jr. (4.099, 299.16 mph) in last year’s final. His individual record at Bandimere is 29-9, numbers that make him the closest thing there is to a high-altitude super hero.
For his part, Hight gives all the credit to Prock, the crew chief with whom he won championships in 2009 and 2017.
“Jimmy has always had a handle on this track,” he said, “from as far back as his dragster days when he was tuning for Joe Amato. So we always come in here with a lot of confidence. This year isn’t any different. I’m really excited to be back on the mountain.
“We’ve had an inconsistent car and only have one win coming in,” Hight said, “but a lot of that is because we decided to make a change at mid-season and go back to what we ran last year.
“Everybody knows that Jimmy’s mindset is to set a record every time we go to the starting line but NHRA’s new track prep just won’t allow us to use all the new stuff we developed for this season,” Hight explained.  “We’ve taken a step back to move forward, I guess, and we’ve just been trying to get the clutch wear right.”
This season Hight has been strong below the mountain as well with four final round appearances including a win in Chicago in June. The crewman turned world champion knows that consistency for a championship run starts with the Western Swing and the first stop in Denver. Last year Hight was two round wins away from joining his boss John Force as the only Funny Car driver to sweep the swing. A win in Denver, combined with a quarterfinal finish in Sonoma and a win in Seattle set up Hight for his second championship.
“Last year we won Denver for our first win of the season and then took the win in Seattle and almost won Sonoma. That three race stretch really gave us the confidence to go out and get that second championship. We have a strong team again and a great race car. It will come around and we will be right in the middle of this fight,” added Hight.
The 39th annual Dodge Mile-High NHRA Nationals begin with qualifying on Friday and Saturday with sessions at 6 and 8 p.m. on both days. Eliminations are set to take place Sunday at 11 a.m.
JFR PR
Post Views: 195