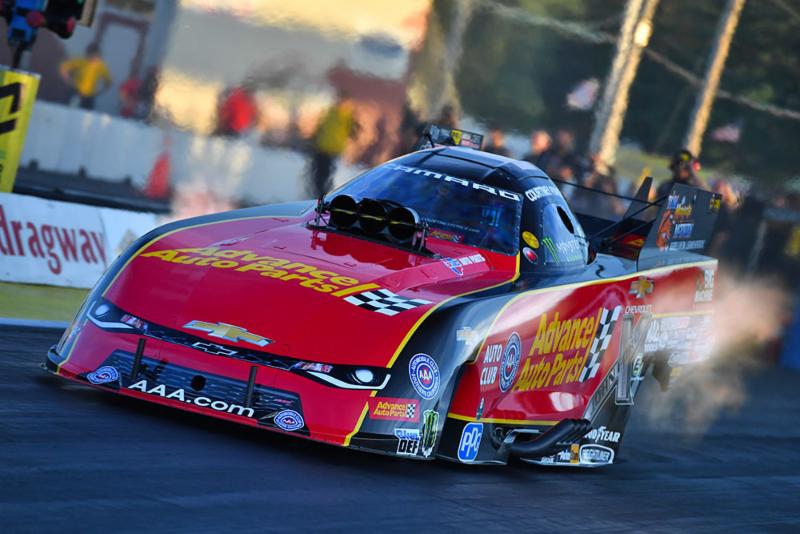 Since the start of the season Courtney Force and the Advance Auto Parts team have been dominating the Funny Car category with eight semifinal finishes in the first thirteen races. Force has punctuated that success with a career best four wins and eight No. 1 qualifiers. In fact, the NHRA Mello Yello points leader for the last seven races has only qualified outside of the top four one time in 2018.
This weekend all eyes will be on the 39th annual Dodge Mile-High NHRA Nationals as FOX will air the race live nationally and the youngest daughter of racing icon John Force is excited to get back on track.
“I am excited to head back to Denver to kick off the Western Swing. We were No. 1 qualifier the last two years at Bandimere Speedway,” said Force. “This Advance Auto Parts team had an early exit last season but we have also raced to the finals in Denver. That is the kind of success we are looking for with this team. We want to extend our points lead and start the Western Swing on the right foot. We are really excited to be on the West Coast and looking forward to a great weekend.”
In her career at Bandimere Speedway Force has two runner-up finishes including a tough race in 2016 against her father John Force who took his win in a nearly photo finish victory. In her rookie season Force raced to the final but she was denied her first victory by veteran Jack Beckman. Force would pick up that win a few weeks later in Seattle.
“It is always fun to race at Denver. This track is tricky with the altitude. It creates a challenge for all the teams and it makes it exciting for the fans. It really does challenge everyone on the team to be at their best. I think this will be a great weekend for our Advance Auto Parts team,” said Force.
No Funny Car driver, besides John Force, has ever swept all three races on the famed Western Swing. Courtney Force would have to be considered one of the favorites to join her father as a driver capable of winning three races in a row. She has wins in Sonoma and Seattle to her credit and with a strong showing this weekend Force could continue to add her name to the record books.
“We are just going to take each one of these races one at a time,” said Force. “You can’t sweep the Western Swing if you don’t win in Denver this year. We have an amazing crew led by Dan Hood and Brian Corradi. I know they will give me a great race car. We stumbled a little in Epping but that is behind us and now we are focused on running like we did last season on the Mountain.”
Last year Force set the track elapsed time and speed records for Bandimere Speedway with a blistering 3.889 second, 328.30 mph run. That kind of performance at altitude was something no one thought possible just a few years ago. Exceeding expectation is something Force has made a career out of and this season she is focused on adding a championship to her list of accomplishments.
The 39th annual Dodge Mile-High NHRA Nationals begin with qualifying on Friday and Saturday with sessions at 6 and 8 p.m. on both days. Eliminations are set to take place Sunday at 11 a.m.
JFR PR/Photo Credit Auto Imagery