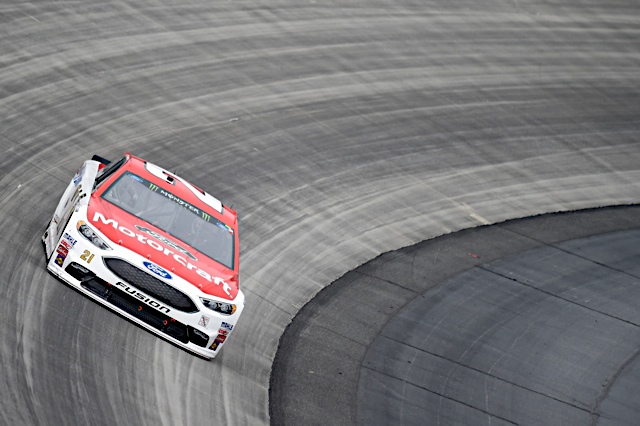 Paul Menard and the No. 21 Motorcraft/Quick Lane team head to New Hampshire Motor Speedway hoping to continue moving closer to a spot in the Monster Energy Cup Series playoffs.

Last weekend at Kentucky Speedway, Menard finished 11th in the Quaker State 400 and earned seven Stage points on the same night two of the drivers he’s battling for a playoff berth had disappointing runs. The net result was that Menard, while remaining 17th in the points standings and 18th in the playoff standings, went from being 55 points away from a playoff spot to 23 away. There are seven races, including Sunday’s Foxwoods Resort Casino 301, left in the 26-race regular season.

Eddie Wood said the relatively short New Hampshire race, combined with the factors involving the race being broken up into three Stages, means race strategy will be especially important on Sunday.

“There will be a lot of strategizing going on,” Wood said. “When you pit during the first stage dictates what you do in the second stage.

“There will be a lot of running through scenarios as we prepare for this race, and during the race we’ll be keeping an eye on what the teams we’re battling for a playoff berth do as far as strategy.”

Wood also said that given the relative shortness of the race and the difficulty of passing on the nearly-flat one-mile New Hampshire oval, a lot of emphasis will be placed on qualifying.

“It’s so hard to pass, so it’s really helpful to start up front, and qualifying up front also gives you a chance to choose one of the better pit stalls,” he said.

This will be the first season since 1996 that New Hampshire has hosted just one Cup Series race, and Wood is hoping the NASCAR fans in New England get to see a great show this weekend.

Qualifying for the Foxwoods 301 is set for Friday at 4:45 p.m., and the race is scheduled to start just after 2 p.m. with TV coverage for both events on NBCSN.