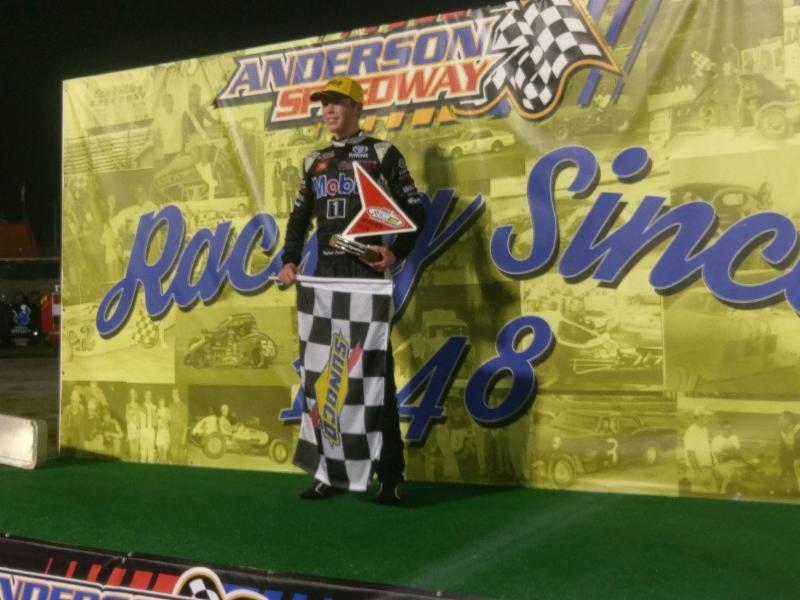 Raphael Lessard led the final 33 laps of Monday night’s prestigious Red Bud 400 ARCA/CRA Super Series Super Late Model race to earn his second marquee victory of the 2018 season. Lessard, who started from the 12th spot, took the lead on lap 368 and had opened up a sizeable lead when a caution on lap 390 set up a five-lap shootout to the finish.
Stephen Nasse would be able to keep pace with Lessard momentarily on the final restart, but the 17-year-old Canadian driver would pull away in the closing laps. After Nasse tangled with Josh Brock on the final lap battling to keep the second spot, Lessard would end up crossing the stripe over two seconds ahead of eventual second-place finisher Johnny VanDoorn.
The victory was the second marquee win of 2018 for Lessard, who won the Super Late Model Feature of the Short Track U.S. Nationals at Bristol (Tenn.) Motor Speedway in May, and the third for KBM’s Super Late Model team. Kyle Busch won the Winter Showdown at Kern Country Raceway Park in Bakersfield, Calif. in February.
The No. 51 FRL Express/Mobil 1 team will be back in action with Lessard Aug. 4 for the CARS Super Late Model event at Hickory (N.C.) Motor Speedway. The talented teenager enters the event with a two-point lead in the championship standings after six race completed.
Raphael Lessard, driver of the No. 51 FRL Express/Mobil 1 Toyota Camry
“Yesterday in practice my car wasn’t really what I wanted, but my crew chief Cody Glick and all the guys at Kyle Busch Motorsports worked super hard to make it better for the race tonight. After each stop tonight they made my FRL Express/Mobil 1 Toyota better and at the end it was the best car on the track. Even though we started from the 12th spot, I knew that if I could stay out of danger early in the race and get near the front that we would have a chance to win. I’m super pumped to get my second win of the year and ready to go get some more.”
Lessard’s win in the Red Bud is the second for the team (Kyle Busch, 2009) and adds to the long list of victories for KBM’s Super Late Model team.
Notable wins for the KBM Late Model team since its inception in 2007 include: Wisconsin All-Star 100 at the Milwaukee Mile (Kyle Busch 2008), Red Bud 300 at Anderson Speedway (Kyle Busch 2009 and Raphael Lessard 2018), Winchester 400 at Winchester Speedway (Kyle Busch 2009, Erik Jones 2013 & 2014 and Noah Gragson 2017), Snowball Derby at Five Flags Speedway (Kyle Busch 2009 & 2017 and Erik Jones 2013), SpeedFest at Lanier National Speedway (Kyle Busch 2009 & 2010), SpeedFest at Watermelon Capital Speedway (Kyle Busch 2012), Rowdy 251 at Berlin Raceway (Kyle Busch 2010, 2011 & 2012), All-American 400 at Fairgrounds Speedway in Nashville (TJ Reaid 2010), Slinger Nationals at Slinger Super Speedway (Kyle Busch 2011), the Oxford 250 at Oxford Plains Speedway (Kyle Busch 2011), Denny Hamlin Short Track Showdown at Richmond International Raceway (Kyle Busch 2013), the Howie Lettow Memorial at the Milwaukee Mile (Kyle Busch 2013 and Erik Jones 2014), the Rattler 250 at South Alabama Speedway (Christopher Bell 2015), the Winter Showdown at Kern County Raceway (Kyle Busch, 2018) and Short Track U.S. Nationals (Raphael Lessard, 2018).
KBM PR