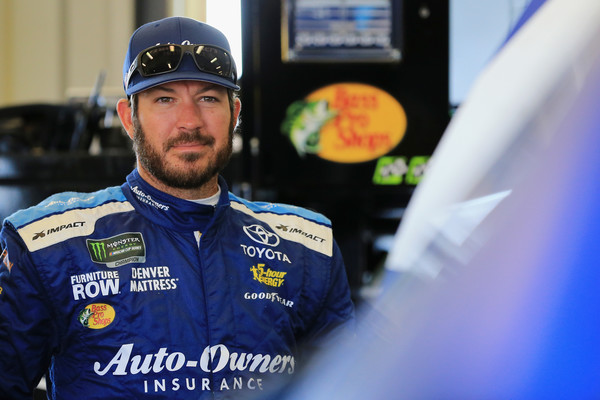 Martin Truex Jr., who has won three of the last six races and a NASCAR Cup Series high of 16 since the start of the 2016 season, said a victory at New Hampshire Motor Speedway on Sunday would carry more personal importance than any of his wins to date.
“I would have to call New Hampshire my first home track because I have been going there for a long time – back as a kid watching my father (Martin Truex Sr.) race,” Truex stated. “Winning at New Hampshire would be the biggest one of them all. It’s no Daytona 500 but it ranks right up there for me.
“It was the first big track I ever won on (K&N Pro East Series), and the first time I ever went to a race and watched Cup cars run. So there’s just a lot of history there, and it would really be a big one to win.”
Though Truex has won at the 1-mile New England track in the Xfinity and K&N Pro East Series, the Cup victory has eluded him even when having one of the fastest cars. In his last four races at New Hampshire he has led 513 laps, including the most laps led in two of the races – September 2016 and July 2017. His last four New Hampshire finishes were: 16th, 7th, 3rd and 5th.
“We had our chances the past couple of years, leading a lot of laps but couldn’t complete the job,” Truex explained. “Last year (July race) we had the best car for a lot of that race but we didn’t at the end. Our focus this weekend is to figure out how to be better the last 75 or 100 laps in our No. 78 5-hour ENERGY/Bass Pro Shops Toyota Camry.”
One of Truex’s fondest memories of New Hampshire Motor Speedway was back in July 1994 watching his father win the Busch North Series race on TNN (The Nashville Network).
“I will never forget that victory,” Truex recalled. “Seeing Dad in Victory Lane celebrating was pretty special. I really wanted to be there and celebrate with him. But it was still pretty cool to see it all happen on television.”
There is no doubt that Truex’s father is also proud and excited to see his son enjoy success. The Furniture Row Racing driver has four season wins, 13 top fives and has posted eight top fives in the last nine races. He won last week’s race at Kentucky Speedway and ranks third in both overall driver and playoff points.
In 24 starts at New Hampshire Motor Speedway Truex has five top fives, 10 top 10s, one pole and has led 661 laps. His average start is 11.4 and average finish 12.9.
FRR PR/Photo Credit Daniel Shirey/Getty Images