CHALLENGING NIGHT FOR DILLON AND GERMAIN RACING AT KENTUCKY 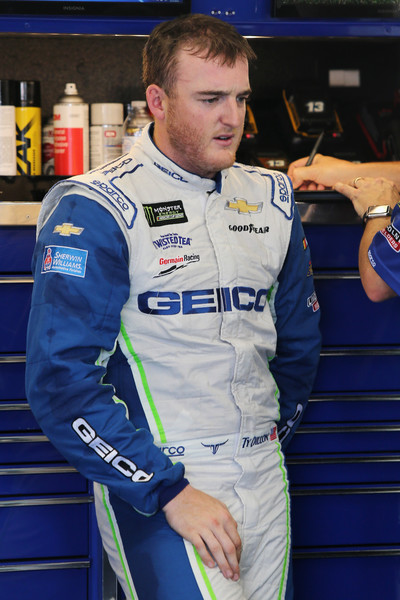 In auto racing, momentum can be a cruel mistress, hugging you one weekend and offering a swift kick the next. Ty Dillon and Germain Racing experienced this betrayal over the weekend at Kentucky Speedway. A week removed from a sixth place finish at Daytona International Speedway, a loose wheel would leave the team frustrated when the checkered flag signaled the end of 400-miles of racing on Saturday night in the Bluegrass State.
Dillon and his No. 13 GEICO Camaro ZL1 looked solid as the weekend got underway on Friday, ending up 25th in the opening practice session before improving to 21st in final practice. When qualifying got underway later that evening, Dillon paced the 1.5-mile paved oval in 29.533-seconds, at a speed of 182.846-miles per hour, landing him 28th on Saturday night’s starting grid, sandwiched between Jimmie Johnson in 27th and Kasey Kahne in 29th.
When the green flag signaled the start of the Quaker State 400, Dillon and the GEICO Camaro rolled off of the grid from the 28th position, but promptly gathered up three positions and moved into the top-25 in the opening two laps. He continued his trek and spotter, Billy O’Dea, affirmed his driver’s progress when lap 15 heard him say to Dillon, “You look really good there, that’s your rhythm.” Dillon hustled the No. 13 GEICO Camaro ZL1 into top-10 by lap 43 and sat as high as eighth before being ordered to pit road on lap 60 for his first scheduled green flag stop of the night.
The team’s strategy included running long in the opening stage, which would allow them to avoid making a pit stop during the upcoming stage break at lap 80, placing Dillon in contention. Unfortunately, a loose wheel plagued the No. 13 entry following the lap 60 pit stop, resulting in lost positions on the racetrack and subsequently forcing a displeased Dillon to deliver his GEICO machine to pit road upon the conclusion of stage one rather than taking the previously planned wavearound. This departure from the team’s strategy left them multiple laps down and playing catch-up for the balance of the evening. While his lap times were comparable with the leaders for a bulk of the night, much-needed cautions failed to manifest themselves, which left Dillon and company at an insurmountable deficit.
When the checkered flag halted 267-laps of racing action under the lights in Kentucky, Dillon was credited with a 29th place finish.
“Our GEICO Camaro ZL1 was decent, but I got tighter the closer we got to the end,” Dillon said. “We decided to gamble a couple times by taking the wavearound and hoping to get a quick yellow. Unfortunately it didn’t work out the way we wanted, but it was worth the shot. We will keep working on our intermediate package, finding speed and gaining ground with our car. This Germain Racing team doesn’t give up and we will take what we can from tonight.”
Next up for Germain Racing is a trip to the Granite State for race number 20 of the Monster Energy NASCAR Cup Series season.
Ty Dillon and the No. 13 GEICO Military Camaro ZL1 will hit the track at New Hampshire Motor Speedway for the weekend’s opening practice session on Friday, July 20th, at noon (ET). Qualifying will follow at 4:45 PM (ET).
The Foxwoods Resort Casino 301 Monster Energy NASCAR Cup Series race is on Sunday, July 22nd, and it will be televised live on NBCSN beginning at 2 PM (ET). The Performance Racing Network (PRN) will carry the live radio broadcast, along with SiriusXM NASCAR Radio, channel 90.
PMI PR/Photo Credit Jerry Markland/Getty Images