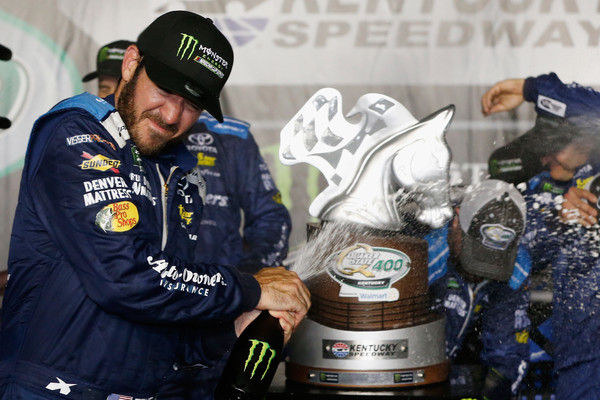 Driving a race car that ran like a thoroughbred at Kentucky Speedway, Martin Truex Jr. claimed his fourth victory of the season and his second straight at the 1.5-mile track.
It was a perfect weekend for Truex in the Bluegrass state. He not only won the race, he qualified on the pole, won the first two stages and collected the seven maximum playoff bonus points.  He remains third in both overall driver points and playoff points.
The NASCAR Cup Series victory was Truex’s 19th of his career (17 with Furniture Row Racing) and it was the Denver-based team’s 18 career win.  And since taking over the crew chief duties for Furniture Row Racing in 2015, Cole Pearn has been atop the pit box for 17 wins.
Truex’s No. 78 Auto-Owners Insurance Toyota was dominant throughout the 267 lap race. He led five times for a race high of 174 laps, including the final 44. His margin of victory over Ryan Blaney was 1.9 seconds.
“It feels good,” said Truex about scoring his first victory at a mile and a half track this season. “You never know how these races are going to play out. You never know what is going to happen and we had such a strong Toyota tonight. They weren’t going to beat us.”
Truex and the No. 78 team kept patient all night even when the lead was lost when some teams opted for two tires instead of four.
“We just keep our heads down and don’t get too excited,” Truex stated. “We keep working on the race car and try to stay calm and not get ahead of ourselves. We had to make a lot of adjustments tonight on the car and had to battle back a few times after getting passed for the lead. But this Auto-Owners Insurance Toyota was amazing tonight.
“Thanks to everybody for their support and making all this possible – Toyota, TRD (Toyota Racing Development), Bass Pro Shops, 5-hour ENERGY, Furniture Row, Denver Mattress, Auto-Owners Insurance of course being our primary tonight and so many people that make this possible. I’m just the lucky guy who gets to drive the car. Pretty exciting night for us, and two in a row at a race track is pretty cool.”
In the last nine races, Truex has three wins, three runners-up and eight top fives.
Asked if he was ready to keep rolling Truex said, “Yeah, man, that’s the plan. Get our mile-and-a-half stuff figured out – we’re going to need it for the playoffs. It’s good to get this one under the hat and keep working for the playoffs.”
Finishing positions 3-10 went to: Brad Keselowski, Kyle Busch, Kevin Harvick, Kurt Busch, Erik Jones, Aric Almirola, Kyle Larson and Joey Logano.
The Quaker State 400 had four cautions for 22 laps and 14 lead changes among seven drivers.
The next NASCAR Cup Series race is Sunday July 22 at New Hampshire Motor Speedway in Loudon.
FRR PR/Photo Credit Brian Lawdermilk/Getty Images