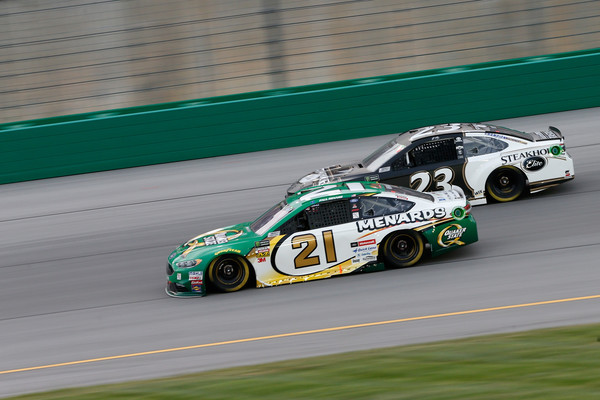 Paul Menard and the No. 21 Menards/Quaker State team turned in one of their most consistently good performances of the season in Saturday night’s Quaker State 400 at Kentucky Speedway and came away with an 11th place finish plus seven stage points.

The points earned allowed Menard and the No. 21 team to significantly improve their points situation in the Monster Energy Cup Series standings. Menard remains in 17th place, but he’s now just 23 points away from the 16th and final spot in the Playoff standings. He entered Saturday’s 400-miler 55 points out of a Playoff spot.

Menard started sixth and ran in the top five for most of the first 80-lap stage, earning six stage points for his fifth-place finish. He finished 10th in stage two and picked up another point.

In the race’s final segment, he fell to 15th place early on and was running there for the race’s final restart with 53 laps remaining. In the race-ending green-flag run, he quickly drove his way into the top-10 but eventually wound up 11th.

It was his career-best finish at Kentucky and his sixth finish of 11th or better in the 19 races run so far this season.

Eddie Wood said the Kentucky performance was the result of good work by every key member of the team.

“The pit crew did a great job,” he said. “Greg Erwin called a great race, and Paul did a terrific job behind the wheel.”

“They earned a good starting position in qualifying and were able to capitalize on it in the race.”

Wood also said he was glad to see the No. 21 running among the leaders, thereby getting attention for his team’s sponsors from fans and the media.

“It was nice to run well in a Quaker State-sponsored race when we had Quaker State on our car too,” he said.

And, Wood said, thanks to the Kentucky finish, he has renewed Playoff hopes as the Cup series heads into the final seven races of the regular season.

“It was really important to have a good night points-wise,” he said.

Menard and the Wood Brothers’ No. 21 will be back in the Motorcraft/Quick Lane colors when the Cup series returns to the track for next Sunday’s Foxwoods Resort Casino 301 at New Hampshire Motor Speedway.