Menard To Start Sixth In Quaker State 400 At Kentucky 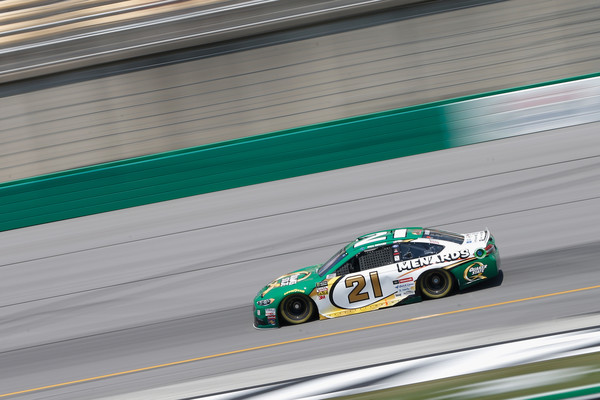 Winning the pole at Chicagoland Speedway two weeks ago appears to have raised the qualifying expectations for Paul Menard and the No. 21 Menards/Quaker State team.

Menard qualified sixth fastest for Saturday’s Quaker State 400 at Kentucky Speedway, but in his post-qualifying comments he indicated he wanted more.

His lap at 188.121 miles per hour in the third and final round of knock-out qualifying was just over a tenth of a second per lap from the pole-winning speed of 188.890 mph.

“A tenth within the pole is kind of bittersweet,” Menard said. “We know we’re right there, but just wanted that little bit more.”

He and the Menards/Quaker State team devoted both sessions to perfecting their set-up for Saturday night’s 400-mile race. For qualifying, they relied on notes from their Ford teammates at Team Penske and went from there, with good results.

“We didn’t do a mock run in practice, so we kind of guessed [for qualifying],” Menard said. “We looked at what the Penske cars did and adjusted to kind of where our balance was in race trim and we were pretty close.”

Eddie Wood said he was left wondering what might have happened if Menard hadn’t run an extra lap in the second round of qualifying.

Because they were so close to the 12th and final spot that would advance them to the final round, Menard and the team elected to start out on an insurance run, in case one of the drivers on the track at that time knocked them out of the final 12.

As it was, the insurance lap wasn’t necessary, but it did add track time and heat to the qualifying tires, which often leads to a reduction in speed in the ensuing qualifying round.

“It absolutely was the right call to go back out in the second round,” Wood said. “We’ll never know what might have happened in the third round if we hadn’t, but we do know that Paul and the team did a great job and we have a fast Ford Fusion for Saturday night.”

The Quaker State 400 is set to get the green flag just after 7:30 p.m. with TV coverage on NBCSN.