Boyd Grinds Out Another Top 25 Finish in Kentucky 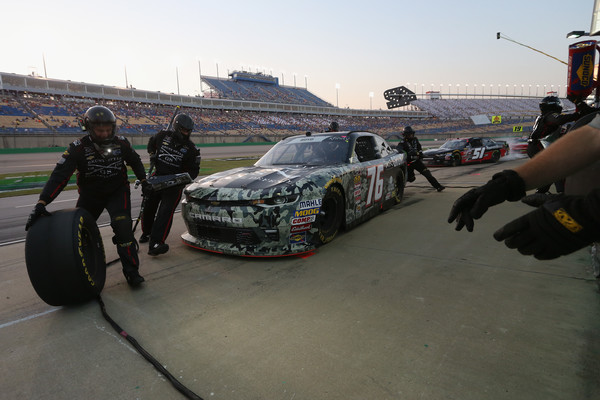 The NASCAR Xfinity Series returned to racing action under the lights Friday at Kentucky Speedway. The 1.5 mile – oval was yet another first time track for Boyd, so his plan going into the weekend was to just simply learn as much as possible.

Boyd was challenged throughout the weekend trying to find speed in the Grunt Style Chevrolet. The team struggled with the handling of the car in both Thursday’s practice sessions. Boyd qualified in the 36th position and it seemed  it was going to be a long night of racing ahead.

As the green flag flew, Boyd went to work. He managed to work his way up to the 32nd position by the end of the first stage. Kyle Busch picked up the stage win after a quick 45 laps. Boyd came in for four tires, fuel, and adjustments to free up his entry. As stage two got underway, Boyd managed to pick up a few more spots to the 30th position throughout the run. Like the first stage, stage two went caution free and saw John Hunter Nemechek pick up the green – white checkered flag.

Boyd radioed to his crew and said the car was much better that last run. Now it was time for the Grunt Style Gladiators to do what they do best. Boyd entered the pits 30th and came out 27th. After a calm first couples stages, a pair of cautions flew early in the final stage. The first for the 78 spinning and the second for the 19 of Brandon Jones.

On lap 132 caution waved again for the 60 of Ty Majeski. Crew Chief Jason Miller decided to play a bit of strategy by leaving Boyd out on the track to take the wave around. The move payed off, as it allowed Boyd to get a lap ahead of the three primary cars he was racing for position. Just before Boyd would have to pit for fuel, caution waved again on lap 147 after Elliott Sadler brushed up against the wall. The final caution of the night came with about 40 laps remaining after the 5 of Michael Annett made contact with the 35 of Joey Gase. Boyd managed to steer clear of all the carnage in the final stage and brought the Grunt Style Chevrolet home in the 24th position.

After the race Boyd reflected, “If you told me at the beginning of race we were going to get out of here with a top 25, I would’ve had my doubts for sure. We really struggled most of the weekend on the balance of the car, but that’s why we race. Sometimes you just have to grind it out and tonight was one of those nights. It was a total team effort. My guys worked extremely hard to make the car better. My Grunt Style Gladiators made awesome stops as usual and Jason made some great strategy calls. We will absolutely take this finish and go to New Hampshire next week with our heads held high.”

Boyd moves up to 22nd in driver standings after another solid showing in Kentucky. The next stop on tour for the Xfinity Series will be in New Hampshire next Saturday. Coverage of the Lake Region 200 will begin Saturday July 21st at 4:00 pm ET.