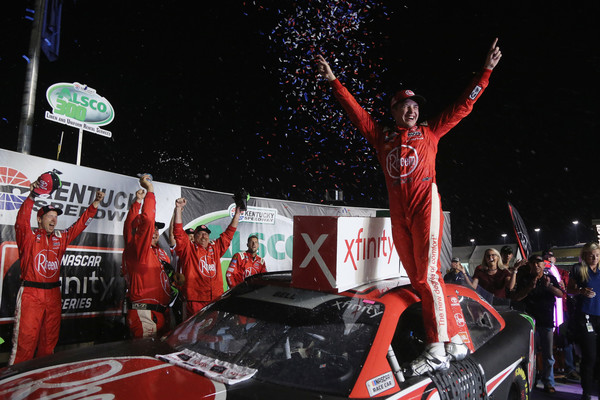 A spin in the final round of NASCAR Xfinity Series qualifying on Friday at Kentucky Speedway set up a rousing run through the Alsco 300 field by Christopher Bell.
The 23-year-old rookie methodically made his way from the back to the front to win for the second time this season and third time in 25 career starts in the Xfinity Series.
“It’s just a mindset,” Bell said. “It’s a matter of not putting yourself in bad positions and letting your crew chief make calls to get you up front and your pit crew to do their job, too.
“That’s something that’s unique about NASCAR racing. I don’t have to pass all the cars. My pit crew can gain me spots. You can get circumstantial restarts where you’re in the right line and you can get spots. It’s not all on my shoulders and thankfully I’ve got a great group of guys that bail me out sometimes.”
Bell completed the comeback with a pass of Justin Allgaier with 17 laps remaining. As the finish drew closer, Bell didn’t flinch. He drove flawlessly with Daniel Hemric in his rearview mirror.
Hemric finished 0.848 of a second behind Bell, painfully close to what would have been his first career win in the series.
“I wish I had the opportunity to re-do a couple of things tonight,” said Hemric, who together with Elliott Sadler leads the series standings. “I was running so hard I overheated the right-rear tire. He missed the bottom two or three laps and gave me a little bit of hope that I could get some back. But he did a good job there the last five laps getting through traffic and not overdriving his entry and keeping me aero-blocked where I couldn’t keep my car turning good enough to even make any gain. At that point, we kind of stalled out. He did everything he was supposed to do. He earned it today and I didn’t.”
The No. 20 Toyota driven by Bell wasn’t the only Joe Gibbs Racing entry that was strong Friday. Kyle Busch, the winningest driver in Xfinity Series history, drove the No. 18 Toyota.
Busch had the dominant car for much of the race. He led a race-high 111 laps and won the first stage but the handling on his car went away in the final stage and he was forced to make an unscheduled pit stop.
Hemric passed him for the lead with 57 laps remaining, the second time in the race that Busch lost the lead under green flag conditions.
Busch made his pit stop a couple of laps after Allgaier passed him for second place. He was 14th on a restart with 14 laps remaining and wound up finishing third.
“We didn’t adjust on it there to keep up with the changing conditions and we got too far behind,” he said.
Allgaier, who finished fourth, knew that he was slower than Bell and Hemric entering Turn 3.
“My problem was my corner entry was dictating my corner exit,” Allgaier said. “I couldn’t really do what (my team) wanted me to do. It was so frustrating from behind the wheel, knowing how to go faster and just not being able to do it.”
Friday was not the first time Bell has orchestrated a comeback at Kentucky Speedway. Last July, he overcame a spin in a Camping World Truck Series race to win it.
Crew chief Jason Ratcliff took the blame for Bell’s spin in qualifying.
“I over-adjusted the car in the last stage of qualifying and got it too free,” he said. “The car was fast. We didn’t do anything different starting in the back than we did starting in the front. He did a nice job of working his way back into the top 20 really quick. We took a big swing at it on the first pit stop to try to get the rear of the car underneath him. From that point, we had good track position. It was just a matter of tweaking on it until the end.”
Restarts proved ultra-competitive as drivers jockeyed for position.
Bell, who won the 2017 Camping World Truck Series championship, said the racing groove didn’t widen out much but it got to the point that drivers could run a second groove to pass slower cars.
“The fast groove never moved,” Bell said. “I don’t foresee that happening for a long time to come. I’d say the groove maybe widened out a little bit. We got to the point where we could drive around lapped cars fairly confidently at least in (Turns) 1 and 2. So that was a positive. But the fast groove for now, next year and probably several more years is probably going to be right on the yellow line.”
Cole Custer won the pole for Friday’s race and led the first 14 laps. He finished fifth followed by Tyler Reddick and John Hunter Nemechek, who won the second stage.
The race featured eight lead changes among seven drivers and was slowed by seven cautions for 32 laps.
KYS PR/Photo Credit Jerry Markland/Getty Images